The selection of the role of Humayun for the play "Rakshabandhan - the bond of love" was being conducted during English class. All the students had to read one page aloud for the tryouts. Shrey loved to read but he did not want to play the lead role because he had extreme stage fright. Just the thought of going on stage was enough to make him nervous. However, despite his nervousness, he read his part as he was an obedient student.
The next day, the teacher announced the list of the students chosen for the play. Shrey had been selected to play the role of Humayun. He was terribly scared but knew he had no other option.
He went home and talked to his elder brother Shivam about being selected for the play, "Will I be able to go on stage? Is it possible? I think it is an impossible task for me. I shall fail miserably." 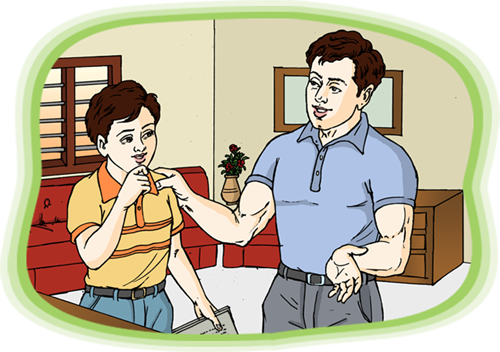 Shivam told Shrey, "Shrey, if we have a negative attitude before starting any activity, then it depletes the energy to complete that task from within. So always be positive." Shivam would always inspire and comfort him. He added, "Okay, tell me, what's the worst that could happen?"


After pondering over it Shrey answered, "I might possibly forget my dialogues on stage. The audience will laugh at me." Shivam said, "Do you know, whenever I am scared, I try to find something positive in the situation and that is the key to making me fearless. In this situation, if the audience laughs, you should take it as your way of entertaining them. And remember one thing, only you know the dialogues, not the audience. So if you forget your lines, just say something similar to your dialogue. So there is no need to get scared. Do not lose your confidence and do not worry about what the audience or other people will think of you. I am sure you can do it." Listening to this, Shrey got a new vision and strength. He was now eager to make a good effort and memorize his dialogues. He began practicing daily - while walking, on the way to school, during lunch break, before going to bed and on weekends. Initially, it was difficult for him to remember the long sentences, but gradually he was able to memorize everything.
Eventually, the day of the play arrived. The play was to be performed twice that day. The first show was for the students and the repeat show was for family and friends.
During the first show, Shrey went on stage with full confidence. The play was being performed very smoothly. People would even applause Shrey's dialogues, which pleased him. With the success of the first show, Shrey's self-confidence increased tremendously. 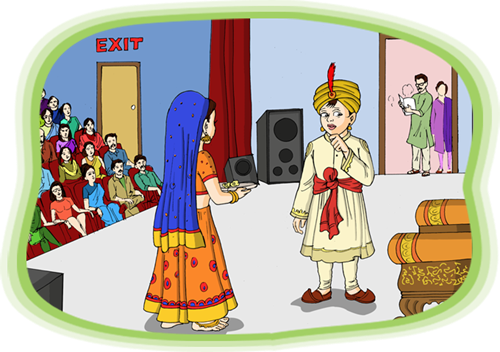 Now the repeat show began. This time around too, the performance was going smoothly, when all of a sudden, Shrey forgot his dialogue. He did not get scared.  Shivam's voice rang in his ears, "Only you know the dialogues, not the audience. So if you forget them midway, you just have to say something similar to your dialogue. Do not worry about what the audience or other people will think of you." He remained calm and within a few moments, he remembered his lines. He even noticed that when he forgot his lines, the audience neither reacted badly nor laughed at him. On the contrary, they applauded his performance heartily. What was of most importance to him was that his parents and Shivam attended the performance.
The following week, Shrey's fellow students complimented him saying "You performed well," "Too good!" or "Wonderful." But all these compliments held no importance for Shrey, in comparison to the achievement of overcoming his fear. For this he was very obliged towards his elder brother who had inspired him and taught him how to overcome his fears.

Video : Fear of being alone