Beware of blind faith in the name of miracles

Once, in a small village called Rampur, there lived two friends named Suresh and Mahesh. Since childhood, they learned and played together as they grew up. As adults, Suresh who was detached from worldly pleasures remained a bachelor, while Mahesh got married.

After marriage, Mahesh got burdened with all the responsibilities of the household. His parents had aged and the responsibility of his younger siblings was now on Mahesh's shoulders. In due course, he also became the father of three children. Due to a two year long famine, his harvests had been unfruitful. In these circumstances, he mortgaged his land and started taking loans on it in order to meet his household expenses. In this way, his debts piled up and gradually his burdens kept rising.

He was at a loss and wondered, "Now, what should I do? I think I must start a new business or take up a job in the city."

During this period, a hermit had come to his village. In order to attract crowds, the hermit started performing so called 'miracles'. The poor and less fortunate people of the village were impressed by all these acts and started falling into his trap.

Mahesh, like others, approached the hermit, who heard his woes and consoled him saying, "Your stars are not favorable. You will have to make a few offerings along with prayers and everything will be fine." Then he placed a coin on Mahesh's palm and chanted some 'mantra'. In a few moments, the coin became extremely hot. It burned Mahesh and he threw it off his palm.

Mahesh accepted the incident as real, and believed that he needed to rectify the fault in his fate as suggested by the hermit. He started to take more money on loan to pay the hermit. The hermit continued to take advantage of Mahesh, by fooling him with new miracles on a regular basis. In this way, Mahesh almost became broke. Mahesh couldn't see a way out and was thoroughly confused about what he should do next. 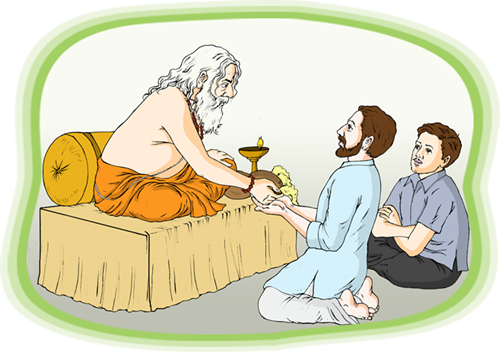 Coincidentally one day, he came across his childhood friend Suresh. Suresh was shocked to see Mahesh in this state. Mahesh related everything to his friend Suresh; who immediately understood that it was a fraud in the name of the miracles.

Suresh said to Mahesh, "Come on, let's both go to the hermit." Suresh informed the police of the sham and took the police along with him.

Upon meeting the hermit, Suresh pretended as though he was also very unfortunate and needed some help.

"Sir, please help me. Everything I do goes wrong."

The hermit as expected placed a coin on his palm and chanted a 'mantra'. A few moments later, the coin became extremely hot. In order to trap the saint, Suresh behaved as though he was dazzled by the act. The saint then produced some red vermillion powder from his palms. 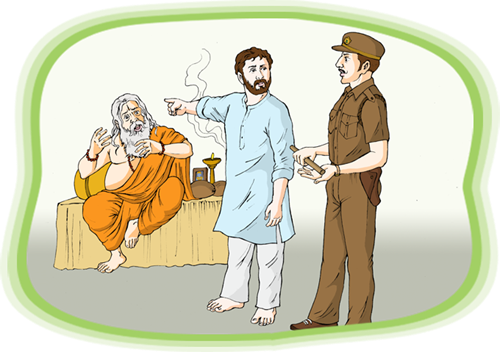 Seeing this Suresh said, "Why are you producing red vermillion powder? Produce something that will be of use to people. If you produce saffron, at least it can be used to make sweet milk. Produce money, so it can be useful to donate to poor people. You have put up a phony act. You are swindling people in the name of miracles."

The hermit got scared and tried to run away but Suresh immediately signaled the police to catch him. The hermit accepted that he used hand tricks and scientific experiments to make a show of 'miracles', in order to spread blind faith and swindle people. The police interrogated him and got him to return everybody's money and valuables. Mahesh also got his money and valuables back.

Suresh threatened the hermit saying, "Tell us how the coin got hot or else you will have to go to prison." The mortified hermit answered, "On applying a particular chemical to a metal coin, due to the formation of a chemical compound, the coin heats up by itself in a few moments. The spectator would feel as if a miracle truly happened, but it is not a miracle, it is just science.''

Friends, if you witness such miracles, from now onwards you will be careful, won't you? You will not get conned, right?