Neha was very upset because her little sister spilled water on her science project. This was not the first time that her sister had spoiled her school work. So, Neha requested her parents to buy her a study table with drawers where she could safely keep her books.

She casually opened a drawer in an old black table. And, guess what she found? A small transparent plastic bag with some rupee notes.

"Maybe I have found somebody's secret stuff. Am I the luckiest twelve-year old? My birthday is coming up soon. With this money, I can buy myself great many presents…. maybe a bicycle, stationery, dresses..... and maybe I can even buy things for my family", Neha thought. She was overcome with greed and quickly pushed the bag to the end of the drawer.

She went to her mother and told her that she wanted to buy that black table. Neha's mother told her that the table looked too old and she should look for something better. "No!, I like this one. I will paint it and glue some stickers on it to make it look better", Neha insisted. She was feeling scared from inside but her greed prompted her to lie.

Neha could not wait until everybody left after the table was organized in her room. She locked the room and quickly opened the drawer and took the plastic bag with rupee notes out. There was a note in the money bag. It seemed that some old lady was saving the money for her children and grandchildren. Neha began counting the money. She could hear her heart beat louder and louder when finally she counted twelve thousand rupees.

But now, with the money she had, she thought that she would have to make up many lies to spend that money. She would have to hide the money all the time and was already feeling very scared. She thought, "This money is not meant for me. The old lady had been saving this money for her family. She must have passed away and nobody would have known about the money in the drawer. Therefore, the family would have sold it to the second-hand furniture store." 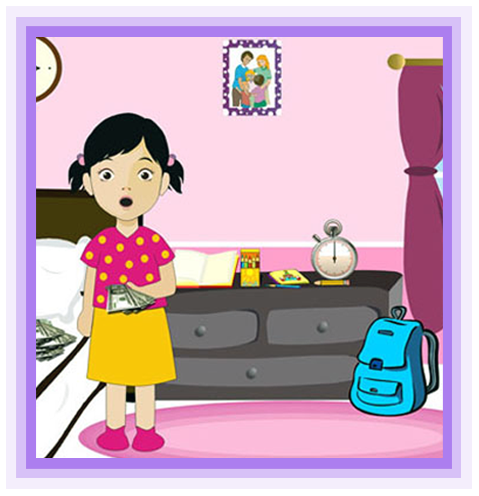 Neha thought about her past week, "First, I failed my math test and then my little sister destroyed my science project. I didn't even get selected for the sports team this year. And finally, I found this treasure and that too when my birthday is coming up! Yet, I don't feel good about it… Why?" she already knew the answer. She had felt a constant fear of getting caught from the moment she thought of stealing. She knew she would have to lie to spend the money and one lie would eventually lead to another. Neha had lost her peace of mind but she knew right from wrong. She had lost her honesty for a while but she wanted to regain it back.

She called her parents into her room and showed them the plastic bag. She confessed to them that she had seen the bag in the store but was overcome with greed and hence stolen it. "Let us take it back to the store and find the old lady's family", Neha told her parents. Neha's parents did not scold her but appreciated her honesty in the matter.

The store owner was quite surprised on hearing the story. "You mean to say that you found almost twelve thousand rupees in cash and you are here to return it?" he asked. Looking through the records, he found the family's telephone number. Within a few minutes, the family came over to the store. The family was similar to Neha's family.They were still sad about her death and were also in need of money. They had been praying for help and it turned out that Neha brought it as an answer to their prayers. Neha's parents had tears in their eyes.

Neha thought, "I have never felt better after stealing. No new bicycle or clothes can make me feel better. I may have failed the math test but I have passed a more important test - the lost and found test of my honesty."

Moral:One should start feeling burdensome & fearful with just the thought of lying. Dadashri says, "When a person lies for his selfish motives, the result is rebirth in the animal kingdom. If one lies while merit karmas are unfolding then he/she may not be caught but he/she will receive punishment for it in the next birth. In the subsequent birth, even if he/she speaks the truth, he/she will be blamed for lying. Lying has been the cause of loss of speech (being born dumb) & all this is a punishment."