In Britain, children call him Father Christmas. In Germany, he is Kriss Kringle. And of course, you know him as Santa Claus. But do you know that hundreds of years ago, Santa Claus was called by the name of  'St. Nicholas'?

Hundreds of years ago, Nicholas lived in a seaside town called Myra which is now known as Turkey. Ever since Nicholas was a small child, he loved God more than anything else in the world . He studied hard, prayed often and followed God by helping the poor.

There was a man living in Myra who was very poor. This man had no wife but he had three young daughters who were of marriageable age. This man was so poor that he had no money for his daughters' marriages. Nicholas heard about this man's condition. One night, Nicholas crept to the man's home and threw something through the window. It was a bag of gold which was enough to pay for his eldest daughter's wedding. 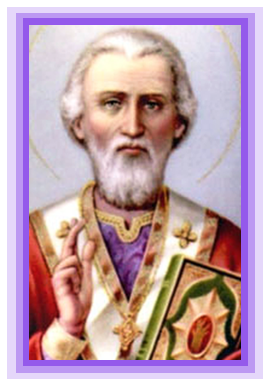 The man was overjoyed and his daughter was too. She married happily but her father was still left with two younger daughters. Nicholas returned one night and again threw a bag of gold through  the window. The father rejoiced but he wondered who was helping him and why.

Of course, Nicholas didn't want the man to know. He believed that it's best to help others without letting them know we're helping  them. If we help others in this way, it proves that we help because  we truly want to and not because we want to be praised by others for it.

But the father was determined to know who was helping him. He had one daughter left and no money for his youngest daughter's marriage. He certainly hoped that he would be helped again, especially because he wanted to find out who was doing it. So, he locked the windows and watched the door. Nicholas still wanted to help but he  didn't want to be seen. Therefore, in the back of the house far from the father's sight, he dropped the bag of gold for the third daughter right down the chimney!!

In this way St. Nicholas helped the poor man and never expected anything in return for his help. He only thought about what he could give to those who needed his help.

Moral: Anyone like St. Nicholas is actually a superhuman & such a person is blessed by God & all the Deities because of his nobility. In today's world, many people help others but they wish to be recognized well in the society & they wish to get something in return. But St. Nicholas was such a kind of a person who always helped others & never expected anything back. The law of nature says if you help others without desiring anything in return, you will receive everything. And will never face difficulty throughout your life.