The test of Swami Vivekanand

SWAMI VIVEKANAND'S inspiring personality has been well known in India and abroad for the past many decades. This unknown monk of India suddenly rose to fame at the Parliament of Religions held in Chicago (America) in 1893, representing Hinduism. His vast knowledge of Eastern and Western culture as well as his deep spiritual insight, brilliant conversational skills, empathy and colorful personality made a mark on the hearts of many. People who happened to see or hear Swami Vivekanand even once still cherish his memory after a lapse of more than half a century. 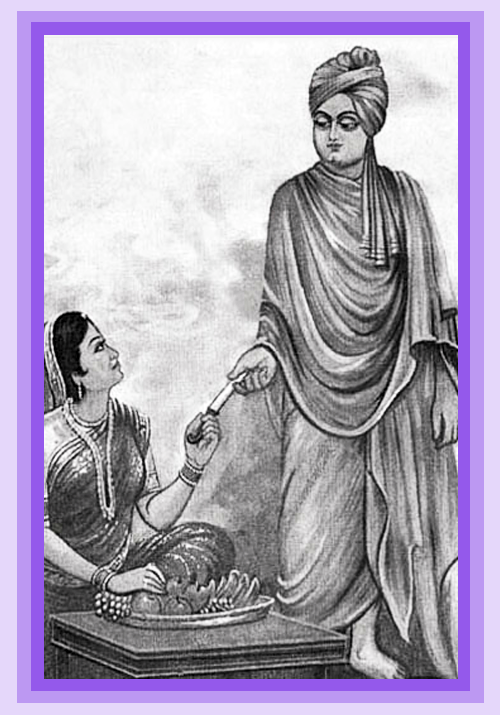 Before leaving for abroad for the first time to preach Hinduism, Vivekanand's mother wanted to know whether he is all perfect for this mission or not, she invited him for dinner. Vivekanand enjoyed the food that had the additional flavor of his mother's special love and affection. After the delicious dinner, Vivekanand's mother offered Vivekanand a dish of fruits and a knife. Vivekanand cut the fruit, ate it and after that his mother said, "Son, can you please give me the knife, I need it." Vivekanand immediately responded by giving the knife.

Vivekanand's mother calmly said, "Son, you have passed my test and I heartily bless you for going abroad." Vivekanand surprisingly asked, "Mother, how did you test me? I didn't understand."

Mother replied, "Son, when I asked for the knife, I saw how you handed it to me, you gave the knife by holding its sharp edge and kept the wooden handle of knife towards me. This way, I would not get hurt when I take it and this means you took care of me. And this was your test in which you passed.

The person who thinks of others welfare rather than thinking about oneself has got the right of preaching the world and you have got that right. You have all my blessings."

This was the most important mark he left in the hearts of many he met in his lifetime - to think of others before thinking for oneself.

Moral: There are some qualities which draw the difference between a common man & an uncommon man. To think about the welfare of everyone falls under an extraordinary quality. The true noble person is the one who thinks of other's happiness even if it is in little matters to our day to day life. The one who thinks of himself alone is considered selfish & will not be valued by the world in the long run. It is the law of nature that as the bigger hearted & noble you become, the more you will keep receiving & as the narrower minded you become, the less you will receive.