It was Uttarayan, the day of the kite flying festival. Sahil's uttarayan had actually begun a month ago but today his enthusiasm knew no bounds. Sahil had invited many of his school friends to celebrate the kite flying festival from the terrace at his home. By 8.00 o'clock the school gang had arrived. The neighbouring terraces were also brimming with children and youngsters. In no time at all, the sky was covered with colorful kites. The environment was filled with sounds of, "I've cut it! … Oi, retract that string."

Songs played on a music system in one corner of the terrace. In another corner lay a pile of kites and heaps of tangled thread. Sahil's neighbor, Manju aunty sat in the shade and untangled the knots in the thread and bound them to the opposite corners of the kites. If the need arouse she even helped by holding the reels of thread for the children. When the boys came to her for more kites they took along a piece of Manju aunty's homemade 'sesame chikki' (a sweet snack) to munch on.

Thus the day was being spent in fun and enjoyment. In the evening around 4:00 or 5:00 pm, Sahil's friend Tarang brought chocolates, cakes, chips and cold drinks from the nearby bakery. Sahil cut the cake into pieces and offered one to Manju aunty who asked "But dear, this cake must have eggs. That baker doesn't make eggless cakes, does he?" 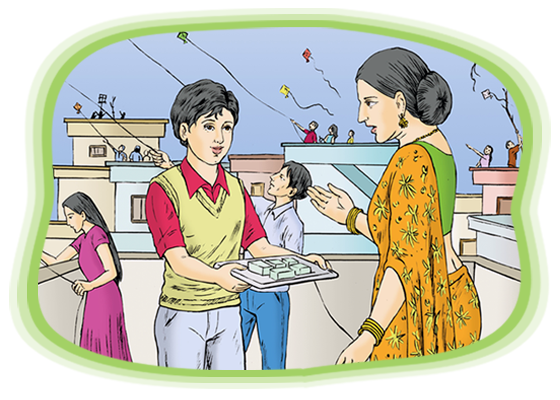 Sahil replied back with laughter and mischief, "Oh aunty, cakes only taste good when they are made with eggs. Eggs can be eaten because they don't have life. They are considered vegetarian." But when he saw Manju aunty's grave expression, the smile on Sahil's face vanished. Then Manju aunty solemnly explained, "Sahil, in this world nothing without life can be eaten. If there was no life in an egg, then an egg wouldn't be edible either. It would have been considered an object."

Sahil was able to digest the explanation, however, he continued to argue saying, "But in our school, we were taught that eggs provide a lot of protein."

"Oh! Should eggs really be eaten just for the sake of protein? The sesame you just ate in your 'chikki' right now, also provides a lot of protein. How can we kill any living being? God has said that you should not kill, eat or do anything to those beings which feel harassment or fear because of you. The egg does not feel harassed but the life within is in an unconscious state. When the egg hatches …" Before Manju aunty could finish her statement, screams were heard from down below. A few people from the building had gathered underneath a dense tree. Seeing this Sahil and his friends ran down too. There they saw a bird in the tree which was entangled in thread from a kite. It attempted to fly away many times, but got all the more entangled. One of Sahil's friend tried to free it but his efforts were futile.

Then Sahil climbed up the tree too. The bird was terribly frightened. Sahil's heart was overwhelmed with emotion to see its' fear. He started untangling the thread gently. Just then his gaze fell on the bird's nest. There was a small egg inside it. It seemed like the bird was desperate to reach out to its baby which lay within the nest. Finally, Sahil's hard work paid off. He freed the bird from the tangled thread and everyone heaved a sigh of relief.

The bird immediately flew towards its' egg. Seeing the bird's struggle and it's attachment for its egg, reminded Sahil of Manju aunty's words. He now understood that the bird's baby was living within the egg. How can a person kill another being for his own happiness? How can we punish others for the sake of our own enjoyment? Sahil's interest in eating the cake with eggs had disappeared and his heart was filled with repentance.

Seeing this, Manju aunt's face lit up with a smile and she said, "From today onwards, always remember that while you play be sure that no living being is being hurt! Be aware of this much.

Article : The festival of Makar Sankranti ,  Should we hurt others?

Video : How to wash off faults of eating non veg?