In a small Indian town named Mrunalkund, there lived a learned priest named Shribhuti.He and his wife named Saraswati, had only one daughter named Vegvati.Theirs was a highly honored family. 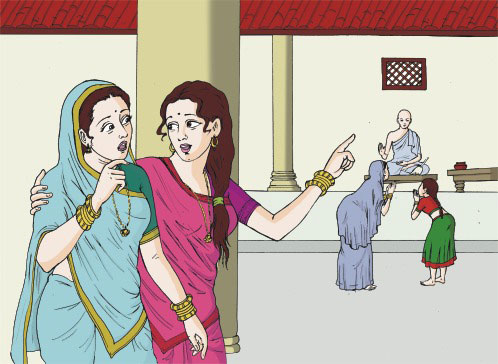 One day, a devout and knowledgeable ascetic arrived at the town. People started flocking to pay their respects to the ascetic. The ascetic's glory increased day by day. It is a pitiable trait of humans that they sometimes suffer being jealous about others. One grieves not only over what one lacks, but also over others people's better fortunes. Who can help them come out of such suffering? Hearing all the praise and honor being showered on the ascetic, poor Vegvati burned with jealousy. Ultimately, she could bear it no longer and started telling people, "This priest is a fraud - you ignore a worthy person such as a Brahmin and run to worship a saint who is always on the move, but you are not aware of his character." 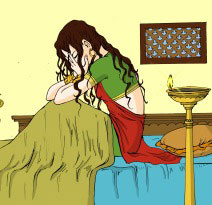 People tend to have interest in listening to the negatives of others. They have more interest in gossiping than speaking positively about others. As Vegvati was out to demean the saint, she left no stone unturned. She started spreading false rumors about the saint. All this cheap talk spread like wild fire across the town, people even believed it and refrained from going to the saint thereafter. Upon knowing this the saint was deeply hurt and he thought, "How can I bear it if due to me the honor of the divine deities is at stake?" He took an oath that "I shall give up food and water until the day these allegations are reversed." Saying this he sat in penance. Because the ascetic was truly pure, a celestial deity came to his help. Vegvati became very ill and was in unbearable pain. Many different types of medication were tried, but none could cure her and her suffering increased by the day. She realized her folly and thought, "All this is a result of the false rumors I spread about a pure saint," and she deeply repented her actions. She asked for forgiveness from the saint, in the presence of fellow villagers by saying, "You are as holy as the fire. I tried to demean you solely out of my jealousy. You are very merciful. Please forgive me. I shall never repeat such a mistake again." Due to her heartfelt repentance, the celestial deity cured her of her agony. On being cured of her illness, she listened to religious preachings and took renunciation from worldly life. On the other hand, people praised the ascetic. Vegvati took her rightful place in heaven on being reborn. 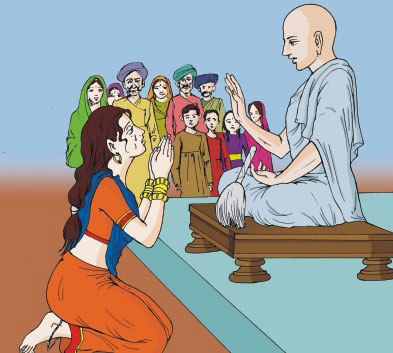 After completing her life span in heaven, Vegvati was reborn as a princess. Due to her misdeeds of disgracing the ascetic in her previous birth, she too had to suffer being disgraced and exiled. As a result she led her life in solitude in the forest.

So friends, did you see how risky it is to speak negatively of others? One should never say or listen to negative things, especially about saints. And when you realize your mistake, you should repent on it. On repenting heartily, all offenses are forgiven.

So pray every day, "Oh Dada Bhagwan, give me the infinite inner strength not to criticize, offend, insult or commit undesirable mistakes against or disrespect any living preacher, teacher or saint."