Once, Shrenik, the king of Magadh was horse riding and he happened to turn up in the midst of a jungle. There he cited a young, handsome and divine ascetic, deep in penance. The ascetic was named Anathi muni. The king was highly impressed by his looks and politely asked the ascetic, "What great sorrow has befallen you at this young age, that you have renounced everything? Return to this world to enjoy its worldly pleasures." The ascetic answered, "O king, I am an orphan in this world, which is why I have abandoned everything and renounced the world. Now I do not wish to trace back my steps." 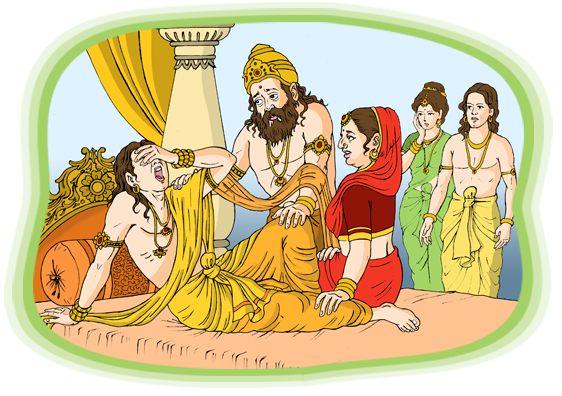 Hearing this, the king said, "Oh! It is such a small matter! Ascetic, I am ready to offer you shelter. I shall always take care of you. Now turn back into the world."

To this Anathi muni responded saying, "O Shrenik! King of Magadh. You yourself are forlorn, then how can you protect me?" The king was shocked to hear the muni's words. He thought, "I have every luxury, I am prosperous and rich, I have a loving family, I am bestowed with all imaginable worldly pleasures, I have a large army at my disposal and I am the ruler of many kingdoms, everyone obeys my orders and I have everything I could yearn for. How can I be orphan even though I have everything?"

Muni continued, "O king? You have not completely understood what I mean to say. Let me resolve your doubts." Saying this, the ascetic started to explain his story. 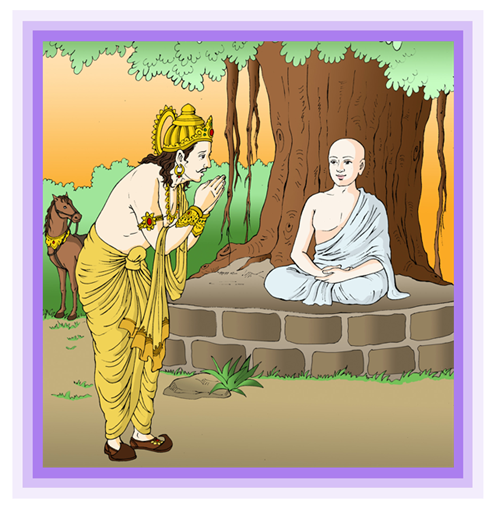 "I was a resident of the beautiful city of Kaushambi. My father, Dhansanchay, was a very wealthy man. One day, all of a sudden, I started having severe pain in my eyes and a burning sensation throughout my body. I was in deep suffering due to this pain. I tried various medicines and treatment options but none provided relief. My parents and siblings all tried hard, but none could soothe my pain nor take it away. O king Shrenik, this itself was my state of forlornness. I had everything and everybody at my disposal, but nobody's love, medication or sincere efforts could help cure me. I was very miserable in my worldly life. One night, I decided that if my disease gets cured, I shall renounce the world and become a monk. The night passed and my disease disappeared along with it. I was cured. I renounced the world with the approval of my parents, family and friends.

From the moment I decided to take refuge in the Lord, I was no more an orphan and came under the Lord's protection."

The king listened to the ascetic's life experience with great curiosity. Then the muni asked the king, "Tell me, O king! Can your wealth, glory, luxury, family, relatives or large army take away your pain?"

The king bowed to the ascetic in affirmation and said, "O ascetic, you are truly blessed. You have chosen the path of salvation in your budding youth. I ask for forgiveness for having tried to lure you back into this material world with my measly conversation. Please forgive me."

Saying this, king Shrenik turned back to his palace feeling graced with the preaching's of the ascetic.

Friends, no matter how blessed we are with luxuries, education, knowledge or good looks, but until we take refuge in the Lord, we are all orphans. A 'Gnani Purush' can help us attain self realization (knowledge of pure soul) and connect us to the Lord. It is only then that we come under the Lord's refuge and attain his shelter.