This is a story of King Shrenik, the ruler of Magadh. He had a well-cultured son named Meghkumar. As a prince, he lived in great splendor and happiness.

Once, Lord Mahavir arrived at their kingdom. Meghkumar joined his parents to pay his respects to the Lord. On seeing the Lord's divinity, he had a strong desire to renounce the world, which he related to his parents. His parents tried to explain to him that it would be a very difficult lifestyle. After renunciation, one has to walk barefoot, eat whatever is offered, sleep on the bare floor, perform severe penance and one has no comfort or happiness at all. To this Meghkumar replied, "I desire only the happiness of salvation and none other than that." Ultimately his parents relented due to his unflinching resolve and gave him permission to proceed. 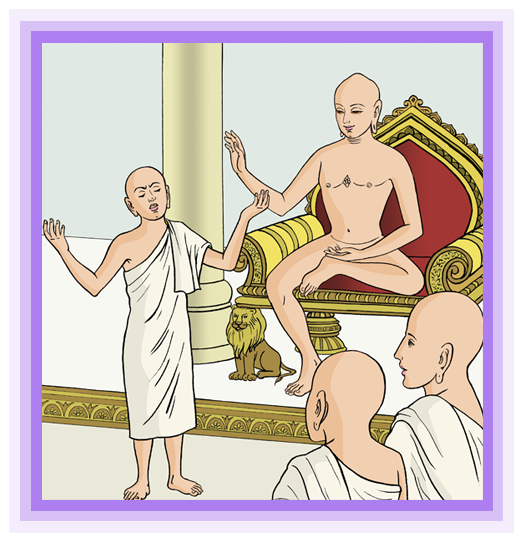 Meghkumar then took initiation into monkhood and was very happy. Now he was no longer Prince Meghkumar but Sage Meghkumar. On the first night after initiation, he made arrangements to sleep besides the other sages. As the sages were to sleep in line by order of their age, Meghkumar who was the youngest, had to sleep in the only space left, near the door. He was unable to sleep all night long, as the other sages coming in and out of the room, kept disturbing him by kicking his feet which lay near the entranceway.

While lying on a single quilt, Meghkumar remembered his palace where until the previous night he had slept on a soft mattress. He then felt that his parents were right when they had said that there would be no comfort and happiness here. "Until yesterday, I stayed in the palace enjoying great honor and respect but today people are kicking me when leaving the room. How will I spend my whole life here like this? I want to go back home!" he fell off to sleep, waiting for the following morning, with these thoughts on his mind. 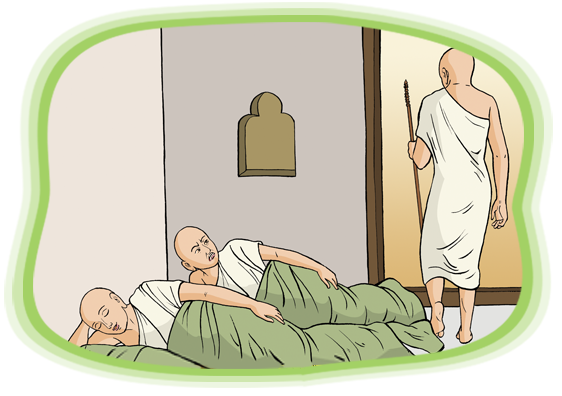 The next morning, at the break of dawn, he went to Lord Mahavir. The Lord being a 'Kevalgnani' knew Meghkumar's intentions for coming to him. The Lord then made Meghkumar recall his previous birth.

In his previous birth, Meghkumar was a huge elephant in a forest called Vindhyachal. Once, the forest caught fire and all the trees got burnt. All the animals ran helter skelter, screaming for their lives. In the centre of the forest, there was an open patch of barren land. Since there were no trees there, the fire did not spread to that area. All the animals gathered there, the entire space was crowded with animals and there was not even an inch of space left. Tigers, lions, rabbits, elephants, giraffes, all stood there together caring for each other as if they were one big family. 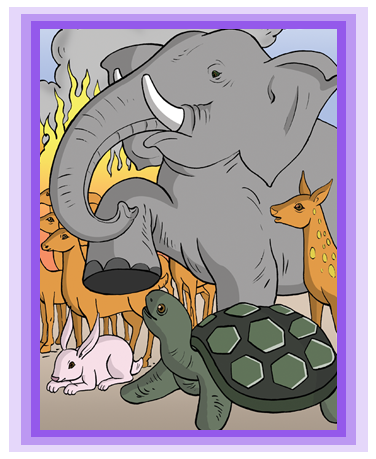 Meghkumar who was then an elephant, also stood amongst them. Feeling an itch on one leg, he lifted that leg. At the same time, a rabbit looking for safety from the fire ran into the empty space under the elephant's leg, and sat there.

The fire continued the next day and the day after. All the animals stood in the same place, feeling hungry and thirsty. Astonishingly, the elephant was standing in its position, with one leg raised for two and a half days. And for what reason? In order to refrain from killing the rabbit. After two and a half days, when the fire extinguished, all the animals scattered away. The elephant's leg had become stiff from having stood in this position for two and a half days. As soon as he placed his leg on the ground, he fell down. The elephant had no strength to stand up, as he was weak and in unbearable pain after 3 days of hunger and thirst. In a few moments, he passed away and was reborn as prince Meghkumar.

After relating his previous birth, the Lord explained to him, that he had undergone such severe penance just to save a rabbit. Getting kicked on the legs was nothing in comparison to the pain he had borne in his previous birth. You have such noble understanding. You are so fortunate and definitely worthy of attaining 'Moksh'. How can you leave the path of salvation because of such minor inflictions?

Meghkumar understood everything, asked for forgiveness and returned to lead a pious life. As a result he was born as a deity in his next birth.