Think twice before you copy

This story dates back many years. A wise old sage named Munjalmuni lived in a city called Sushila. He had established a ‘gurukul’, (a school where students live and learn), near the kutir.

There was a huge banyan tree in the school. Munjalmuni would sit under this tree every day to teach his disciples. One day a cat appeared and sat down beside the sage’s feet. The sage gave the cat some milk. In this way, it became habitual for the cat to come to the sage every day. Even the sage began to enjoy the company of the cat, so he tamed this cat. Whether the sage was undergoing spiritual practice or teaching, the cat would always remain close to him. 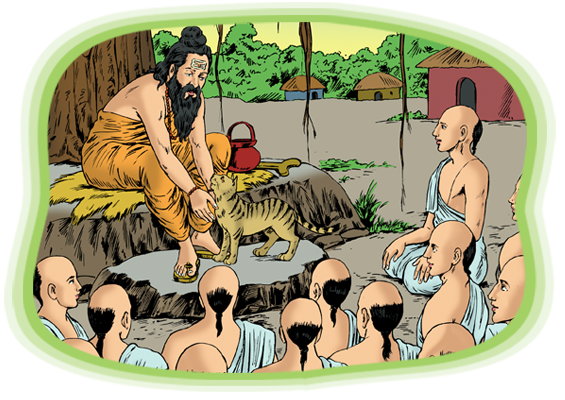 After a few years, Munjalmuni died. The disciples wondered, “What shall we do with the cat?” Even they had become used to the cat. Therefore, they all decided that the cat should remain in the gurukul. Many years passed by in this manner. All the students were progressing under the guidance of the chief disciples.

One day, from a neighboring town, Anandmuni and his disciples, paid a visit to Sushila city. Anandmuni was impressed upon observing the wellbeing and spiritual progress achieved by Munjalmuni’s disciples. He noticed the cat strolling around in the gurukul. Upon discovering that the cat was from Munjalmuni’s time, a thought came in his mind, “This cat must be the reason for the wellbeing and spiritual progress of all these disciples. If I also want to be as well off as them, then I should also tame a cat like this one.”

Therefore, Anandmuni also got a cat for his own gurukul. Slowly this tale spread to other towns too. People started discussing the topic of ‘The necessity of a cat while doing meditation and spiritual practice.’ Everyone started copying each other and started keeping a cat in their gurukul or ashram. A whole generation passed like this. At Munjalmuni’s ashram too, the real reason for the presence of the cat had been forgotten. Even there, if a cat died, a new cat was brought to replace it.

After some time, it so happened that the head of that ashram, Vivekmuni developed an allergy to cat hair. Therefore, he gave instructions for the cat to be removed from the ashram. All the disciples protested strongly. The muni was old and wise. He explained to the disciples, “It is senseless to think that concentration improves with the presence of a cat or that a cat is helpful in any spiritual discipline. By copying each other, a few senseless people have impressed this belief in people’s minds. This is foolish blind faith.”

Vivekmuni was experienced and wise; therefore, the disciples found that his advice made sense. They removed the cat from the ashram.

Gradually, talks of this incident spread across other towns. Fed up of looking after cats, people began to imitate each other once again and drove away cats from their ashrams and gurukuls. Discussions on the topic of ‘The importance of meditating in the absence of a cat’ started taking place in all the towns.

Vivekmuni heard of this matter. Upon hearing it, he laughed lightly. That evening, while teaching his disciples, he said, “It is due to lack of our own intelligence that we tend to copy others. As a result of this imitation, we must be taming so many similar ‘cats’ in our lives. If the cat is responsible for our progress then it is not necessary to have any rules or discipline! But…..”

He had hardly finished the sentence when a cat bounded in and settled down by Vivekmuni’s feet, softly purring “miaow.....” and all the disciples laughed heartily.