The King was enraged on hearing this. He ordered his other servants, “Pour hot lead into the ear of this music loving servant. The ears that have committed the offence of listening to music instead of hearing my order are the ones at fault.” 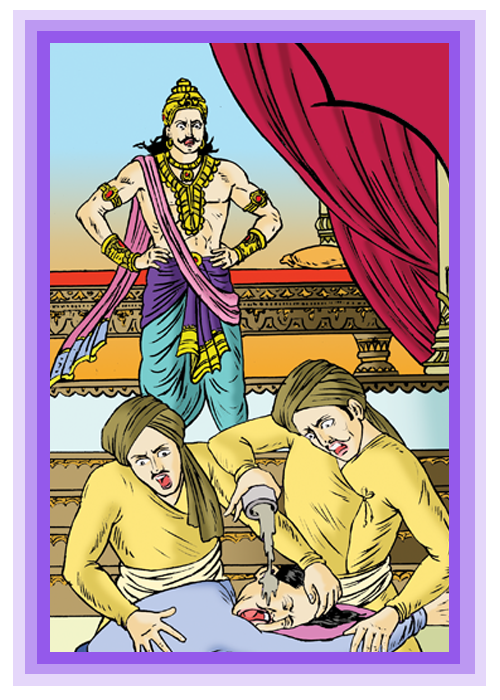 They took the servant to a quiet place and poured very hot lead into his ear. The servant died immediately because of suffering terrible pain. He bound revenge with the King who had caused him such unbearable pain. Tripushta Vasudev completed his life and went to hell.

After many births, the soul of Tripushta Vasudev, entered the womb of Queen Trishalamata, as the 24th Tirthankar, Shri Mahavir Swami. In the same period, the servant was reborn as a cowherd.

One day, when Lord Mahavir was standing in deep introspection, the cowherd brought his cows to graze in the same area. He asked the Lord to look after his cows and went off to finish some work. As the Lord was in deep introspection, it was quite natural that he was not able to keep an eye on the cows. The cows wandered away because no one was looking after them. When the cowherd returned after a short while, he could not see his cows so he asked the Lord, “Oh divine person! Where are my cows?”

The Lord was still in deep introspection and did not reply. This made the cowherd very angry. He said, “Why are you not speaking? Why are you not listening to me? Are these ears of yours just useless?” Even after asking these questions, when the Lord did not respond, the cowherd with extreme anger, pierced the Lord’s ears with ‘baru’ (long steel like blades of grass). He cut the ends of the grass that were sticking out, so that no one would be able to remove them and left.

In this way, as an effect of the karma of pouring hot lead that was charged in Tripushta Vasudev’s lifetime, in the Lord’s lifetime, he had to endure the pain of his ears being pierced by the thick blades of grass.