A Lesson Learnt in the Basement

"…But I only want a video game for my birthday present. I don't want this green dress. I hate this color and the combinations don't match. Who would like such a dress?" This was Toral's reaction to the dress that her mother had bought for her as a 12th birthday gift. "Even a five year old has a video game these days," complained Toral with the same negativity.

"It is not as you believe, Toral," said her mother trying to pacify her. "This is how it is, I know it. This is the reason others don't want to be my friends. It is because I don't have a video game. We don't even have cable TV at home and look at the size of our TV; it's smaller than seven inches. I don't know which century you got this from. We don't even have a DVD player at home. It is so boring to live in this house."  Toral kept grumbling in irritation. 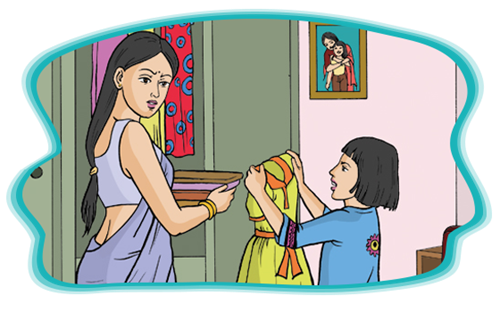 Her mother ignored her complaints and changed the topic saying, "Today Kirti uncle, Ashok uncle, Neeta aunty and their children are going to come for dinner.  Toral, you can play with their children."  "But what is there to play in this house?" Toral complained again. The guests arrived at 7:00pm. Toral guided Aakash, Aarti, Jalpa and Keyur to her room.

"What games do you have, Toral?" asked Aakash. Toral felt that Aakash was asking for a video game. She reluctantly brought snakes and ladders. They all played the game together. Everyone enjoyed playing the game except Toral.After a little while Aarti asked, "Toral, can we go down to the basement to play?"

Toral said, "No, there is nothing in the basement to play with." Ignoring Toral's statement, the children raced to the basement. In one corner of the basement, there lay some empty cartons, utensils, ropes, old newspapers, etc. Upon seeing all this, the children thought of a new game, the memory game. They arranged a few things on the floor. Keyur first studied all the objects lying there and then closed his eyes. Next, Jalpa took away one object, after which Keyur had to look again and spot the missing object. If Keyur was able to guess the missing object correctly, he would score a point and if not, Jalpa would gain one. They all took turns, one after another. 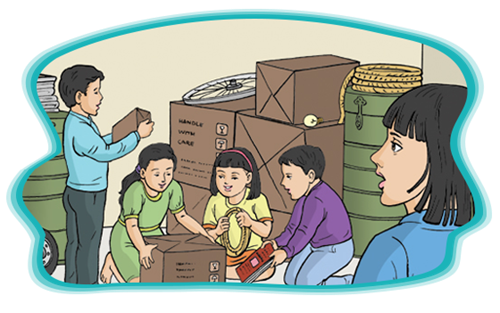 For their next game, they took a plate and a rolling pin. They banged away at the plate with the rolling pin and played, 'Fire on the mountain, run, run, and run.' While playing, they said to Toral, "Didi, we are really enjoying ourselves at your house. There's so much to play with. We shall definitely come back here again." 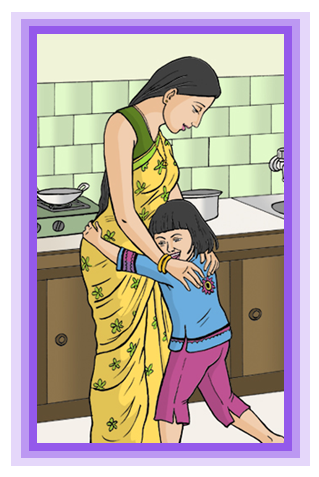 Toral looked at the children in amazement, and realized that in order for them to have fun, no video game was necessary. Instead, they all enjoyed playing with things which Toral considered worthless. Now, she realized that in all circumstances to date, instead of being happy with what she had, she used to find something negative and be miserable. In fact, she had lots of other games and story books, but she was never satisfied with them. Instead she would always complain. Today, she learnt from these children, how to find the positive in everything and always remain happy.

That night after the guests left, Toral sat alone in her room. Her sight fell on the dress that her mother had gifted her, and she thought, "The colour green doesn't look that bad. I have worn purple dresses before too." She repented deeply for venting on her mother and immediately ran to her to ask for forgiveness. Seeing Toral's repentance, her mother hugged her lovingly.

Did you see friends? By being negative we cannot enjoy what we have. Furthermore, we become miserable. Not only does this make us unhappy, but we make those around us unhappy too. So always be positive and find the positive in every circumstance to be happy forever.