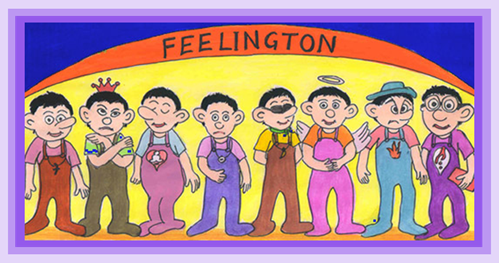 They used to laugh together, play together and shared a strong bond of friendship. Life was fun till they were little tots. However, as they started growing up, things unexpectedly began to change.
One fine morning, Nobility's doorbell rang. As he opened the door, he saw a beautiful gift waiting for him.
"A bicycle!" he exclaimed. "I was so longing for one". His joy knew no bounds. 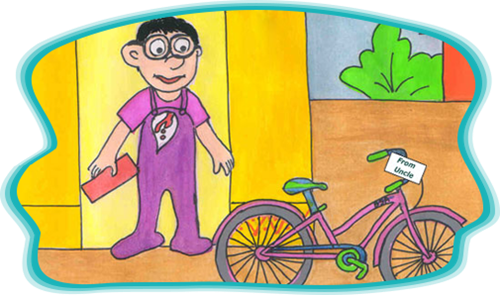 As he went towards it, he saw the note 'From Uncle, With Love' stuck on it.
"Love you uncle!" he exclaimed.
He decided to show it to his friends. The very same day, they all planned to meet.
"Hah!" snapped Pride. "I have a bicycle much brighter than this one."
"Why don't I have an uncle like Nobility?" expressed Jealousy.
"Well you deserve it!" said Positivity.
"Where is Pure love? Why hasn't he come today?" asked Nobility.
In no time, Nobility heard a sweet voice, "Here I am bro! Hey, wow! This cycle is just the type I was looking for!" uttered Pure Love.
"If you find it ideal for yourself Love, then why don't you keep it?" said Nobility.
Love responded, "What? No… no….! I cant take it ,are you sure? Your uncle has sent it for YOU!"
"Don't be silly, he will send me another one! And I am sure, he will be happier if I give you." said Nobility.
"Well…Thank you Nob!" said Pure Love.
Positivity and Prayer both appreciated Nobility for his generosity. However, there was one person who had something else in mind. It was Theft who was silently making plans to steal the bicycle away.
"Keep playing passing the parcel buddies; the cycle is eventually going to be mine! Ha-ha-ha!" muttered Theft. 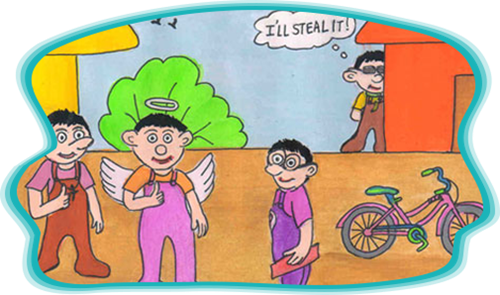 That same night, Theft masked himself and stole the cycle away from Pure Love's place.
Next morning, Pure Love got up early to take a ride on the newly arrived bicycle. However, to his astonishment, the cycle had VANISHED!
"Vanished! Where did my cycle go?" enquired Nobility.
"I just don't know pal" said Pure Love in dismay.
"Don't worry chap; I will ask my uncle to get two new cycles for us."
In no time, they saw Negativity approaching them, "Pure love …Nobility...I saw Theft yesterday secretly taking the cycle from Pure love's courtyard. He is such a wicked person!"
"Don't use such negative terms after all, he is one of our best friends!" exclaimed Pure Love.
"But look what he has done! Only betrayed your trust! A true traitor!"
"If you want, you can tell God what happened and get your cycle back with my help!" advised Prayer.
"No thanks, Prayer. If he likes it, let him keep it." expressed Pure Love.
"If he would have told me earlier, he wouldn't have had to use the wrong means." said Nobility.
"But we certainly don't love him anymore, isn't it Pure Love?" said Pride with his head up.
"No…no…, it can never be that way. Just because he stole my cycle, it does not mean that I stop loving him! Pure love neither increases nor decreases. I love him as much as I love you and Nobility."
Theft over heard all of this from a distance. He was deeply touched. He immediately fell to Pure Love's feet and asked for forgiveness.
"I never found you guilty friend. So, there is no point of forgiveness."
Theft returned the bicycle and from that day onwards, they all got back together in a healthy friendship they had for each other. They were all proud to have a friend like Pure Love.

Dadaji says Pure Love is that which never increases nor decreases. Immaterial of how the person in front of us is, it remains the same! and Nobility is to spend whatever one has (be it his most priced possessions) on another person without a moment's thought. True friends can be identified by these virtues. If you need a true friend, be a true friend!!

Story: A lesson learnt in the basement