A young boy named Manan was living in the countryside in a small farming village. His father worked hard in the farm to earn money, while his mother would do all the household work & help with farm chores. Manan was very mischievous & never liked to study. However, his parents wanted him to study well in a school, so he wouldn't have to struggle on fields as a farmer.

As Manan grew older, he became stubborn too. When he joined high school, he had to work hard to pass his classes & therefore, he dreaded going to school even more. Eventually, he started skipping classes to play outside with other boys who also didn't want to study. Three months passed like this & the final exams were just around the corner. Meanwhile, Manan's parents didn't know about any of this.

Since Manan had skipped so many of his classes, he could not catch up with any of his studies & failed. Seeing his report card, his parents became very worried. Managing one year of school fees was difficult for them to begin with & they hardly managed to make ends meet. They didn't get angry with Manan but instead went to his school to check if there was any mistake in the grades. It was then they learned that Manan had not attended school for the last three months.

Upon learning this, his parents felt very sad & frustrated. Not only because Manan wasted an entire school year but also because he had lied to his parents & disrespected his teachers. They asked Manan for an explanation. In reply, Manan rudely said, "I don't want to study. You're forcing me to go to school. Do whatever you can; I am not going there again!" His parents tried to explain him but he wasn't ready to listen to a word. Manan's father lost patience & scolded him saying, "What do you want to do if not study? Do you want to walk around on the roads & beg for food?" Manan retorted even more forcefully, "Ok! If that's what I can do to avoid school, I'll do just that" & without hearing any more, he left the house.

Manan wandered through the neighborhood & after some time reached another town. For a couple of days, he enjoyed being outside of home & away from school without any restrictions. Within two days, he had spent all the money he had in his pockets to buy food. He slept on a bench in a garden. He had no shelter & no work to do. Nobody had enough trust to give work to a poor school boy. Days passed by & Manan became very lean without food.

People who passed by, threw coins at him assuming he was a beggar. Manan gathered the coins & bought a loaf of bread. As soon as he started eating it, a hungry stray dog ran by & snatched it away from him. Winter was approaching fast & Manan didn't have anything to cover himself during the cold night. He slept shivering on the bench. Eventually, Manan got very sick due to hunger & cold. He then thought of his mother who had always kept meals ready for him in the morning & evening & his father who covered him with a soft, warm blanket during cold nights. He also remembered how lovingly his parents took care of him whenever he was sick and started to miss them a lot.

The next day, a kind boy named Chintan saw him & sympathized. He gave him a blanket to use along with food & medicine. Gradually Manan recovered, so Chintan found him a job at the grocery store where he used to work. Soon, they became good friends. One day, Manan asked Chintan about his parents. Chintan started crying. Surprised Manan asked why he was crying. Chintan replied that his parents died when he was five years old. He was raised by a kind man with whom he now lived in a hut. 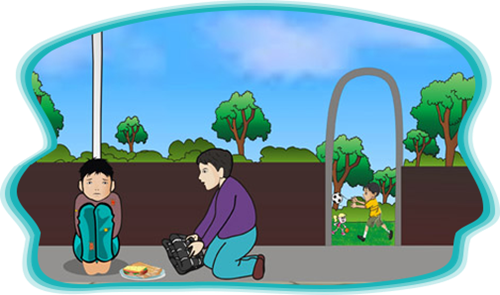 Then, Manan told Chintan his story about how he left his parents. Chintan advised him in a friendly way, "Manan, my friend, you don't have to lose your parents to realize how important they are! Aren't you lucky to have loving parents who want you to study at school? If I were in your place, I would never come to this shop & work." Manan realized all his mistakes & repented a lot. He asked Chintan, "My friend, I've come far away from my parents. I've spoilt a whole year at school. How can I show them my face now?

Chintan took Manan to the old man with whom he lived. Manan told the old man everything. He told him about how he didn't like studying, skipped school, lied to his parents, so no one would find out at home, failed his exams, about how he spoke harshly & rudely to his loving parents & finally left home. Manan cried continuously while talking to the old man. The old man didn't say a word to console Manan & let him cry. Almost every single day, Manan would sit in front of the old man, recall the selfless love of his parents & end up crying with repentance. He felt that his parents will never forgive him for his mistakes

The floor of the old man's hut was finished with hard soil. After some time, with Manan repenting everyday at the same place, his tears made the soil damp & soft. When Manan's crying stopped, the old man pointed out to the dampened floor & told him, "Oh Dear child! If your tears of repentance could dampen the hard soil, why can't it touch the soft hearts of your parents? They will certainly forgive you." Manan asked, "My parents are far away from me & they can't even see me. How can my tears touch their hearts?"

The old man replied, "If you repent truly for all the hurt you have given others, the pure vibrations of your repentance will definitely reach & heal others." He then explained the three steps of pratikraman to Manan. From that day onwards, Manan started doing pratikraman for his parents day & night deciding never to repeat his mistakes again (pratyakhyan) & asked for strength. He worked hard & decided to earn money to pay back the school fees that he had wasted & then go back to live with his parents. Everyday, he started doing pratikraman & pratyakhyan for his parents in his daily routine.He was getting close to get his final paycheck to make his goal. 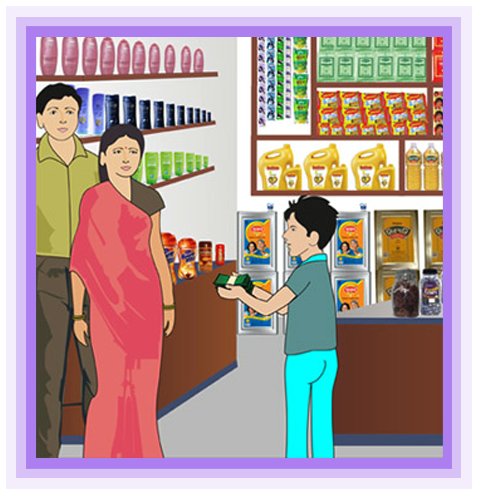 One day, while he was working, the shopkeeper told him that someone was waiting for him outside. Manan went out & saw his mother & father waiting eagerly for him. They had come searching for him! He rushed them & hugged them. He instantly apologized to his parents for all the mistakes he made. They didn't have any complaint against Manan & instead they apologized for not being able to stop him from running away & for being tough with him. They felt proud of Manan as he received his last paycheck that made up an amount equal to one year of his tuition fees. Manan & his parents heartily thanked Chintan & the old wise man for their help & happily left for their town, together.

Moral:Education is one of the ways to learn lessons in life & getting training. Education helps in imparting moral values in our lives & therefore, it is highly significant to be educated. Pratikraman is the way to repent for your mistakes & by that, you can completely come out of your mistakes.