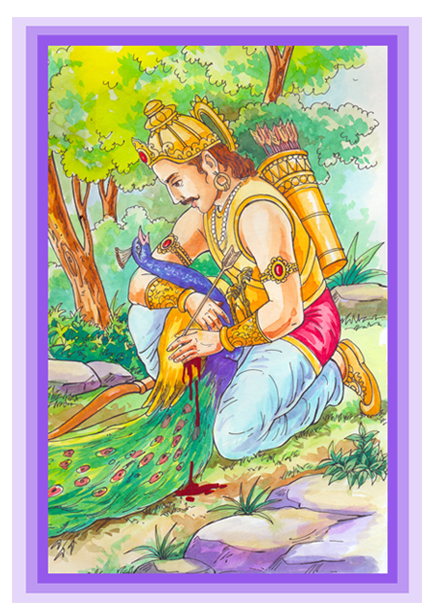 Once upon a time, in the kingdom of  Kshitiprathistha, there lived a king named  Pruthvipal. One day when he was hunting with  his  bow and arrow, he shot the arrow at a  peacock  sitting on a tree. As soon as the arrow  hit the  peacock, it fell with a piercing cry. The arrow had  pierced its body but it was still alive.  The wounded peacock was struggling between  life and death. Seeing the peacock's agony the  king felt  deeply grieved. "Oh! What a cruel deed  I have committed! I have pierced an innocent  being with  my arrow. What if a mightier person  or animal  pierced me or tore me apart, then I  too would  have to suffer just like this peacock."

The king went to the peacock's side. He pulled  out the arrow slowly and tried to stop the  bleeding. Then he stroked the peacock lovingly  and asked for forgiveness. Due to the king's love  and care, the peacock felt at peace and started  having virtuous thoughts. After a few moments it  passed away. As a result of the pious thoughts,  the peacock was reborn as a human in the town of Vishadpur.

One day, king Pruthvipal saw a saint seated on  top of a big boulder. He approached the saint, who gave a sermon saying, "Compassion for  living beings is the mother of religion." Hearing  this, this king immediately accepted 'Shravak  Dharma'. On returning to the palace, king  Pruthvipal burnt all his weapons such as bows  and arrows, traps etc. He spent the rest of his  life abiding by the principles of Shravak Dharma.  After his death, he was reborn in the same town  of Vishadpur, where he grew up to be a rich and  prosperous businessman named Sunand. 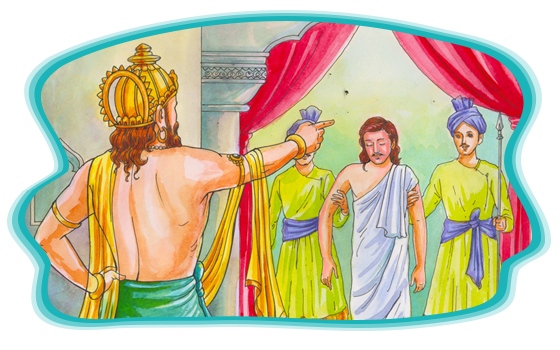 Meanwhile, the peacock was also reborn as a  human in the same town, and was now the  king's 'sevak'. One day, the king's sevak saw Sunand the businessman. As soon as the sevak saw Sunand, the thought of murdering him crossed his mind due to the karma's of their previous birth. From that day on, the sevak was always in search of an opportunity to murder Sunand. 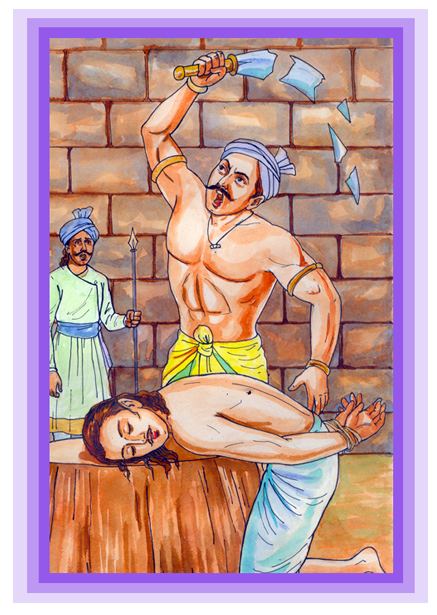 The king questioned Sunand about the necklace. Sunand did not reply which angered the king tremendously. The king ordered for Sunand to be executed. The next day as per the kings' order, when the sevak lifted the sword to execute Sunand, it shattered into pieces. Seeing this, everybody was amazed. As other soldiers lifted their weapons in an attempt to execute Sunand, their weapons shattered into pieces too. Ultimately, they related the incident to the king who immediately went to the place of execution, and gave orders to free Sunand. After being free'd, Sunand went home and finished a few chores before he went to meet the king. Sunand spoke very modestly to the king saying, "O, King! I am a Shravak. We Shravaks never steal. I have many such valuable necklaces in my locker." The king accompanied Sunand to his home and was astonished to see that his wealth included necklaces of greater value than those owned by the queen. Then Sunand said to the king, "O King, yesterday was an auspicious day. I cannot speak of wealth and ornaments on such a day. Thus, I could not respond when you questioned me about the necklace." The king was highly impressed by these words.

As time passed, Sunand handed his business over to his son and took renunciation. In due course, he attained Keval Gnan. Once, on his journey, he happened to reach the town of Vishadpur again. Upon seeing him, the sevak once again started getting thoughts of harming Sunand. Noticing this, Sunand who was now a 'Kevali' preached, "In your previous birth you were a peacock. I had killed you with my arrow while hunting. Now that you have attained this precious human form, bring an end to your bad deeds. These deeds will only make you wander endlessly one life after the next." 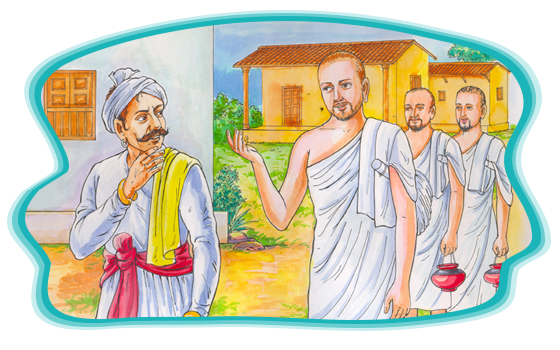 Hearing this, the sevak gained Jatismaran Gnan (Knowledge that enables one to envision his/her previous births). Then, he fearlessly revealed his role in the necklace theft, and asked for forgiveness from all. After this, he took renunciation. In this way, the sevak who was the peacock in his previous birth, repented his mistakes and freed himself from the vengeance towards Sunand, and moved forward on the path to salvation.

So friends, do you understood how heartfelt repentance can free you from binding any kind of vengeance?