In previous story of Bahubali, we read about Bahubali who was overcome with strong feelings of renouncement just when he was about to win the combat. The fist that he raised to kill King Bharat turned to pull out his own hair in an act of renunciation as he walked away into the jungle for penance. Now, let's see what happened next…..

After renunciation, Bahubali decided to join Lord Rushabhdev to take up discipline for the attainment of Moksha. Just then, he remembered his 98 younger brothers who had taken initiation along with his father. Now, on the path of renunciation, age is not a measure of superiority; those who have taken renunciation earlier are considered senior. Recalling this, he realized that, "If I join them, I will have to bow down to my younger brothers daily. I will have to live as their disciple even though I am older than them. I will not be able to do this. I will observe discipline & do penance myself to attain salvation". In this way, his ego & pride obstructed his earlier decision. He decided to seek 'Kevalgnan' on his own & proceeded towards the jungle for penance.

With the sole aim of attaining salvation, Bahubali stood in one position & performed severe penance. He was not deterred from his path even after suffering cold, heat, thirst, hunger, pain or harassment from mosquitoes & other creatures. Years passed by like this. Creepers thriving nearby started to grow along the legs of Bahubali who continued to stand there steadfast. Slowly over time, the creepers covered his whole body except the face. Snakes dug out their holes but Bahubali remained unmoved. 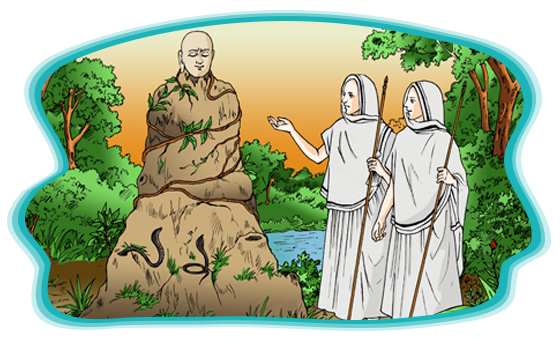 Even after thousands of years of such severe penance, Bahubali didn't attain 'kevalgnan'. On the other hand, Lord Rushabhdev had attained 'Kevalgnan' & could see everything in his divine vision. He noticed that Bahubali could not attain 'Kevalgnan' only due to his pride & ego. The Lord was very compassionate & prompted a course of action for the welfare of Bahubali. He called upon his disciples, Brahmi & Sundari who were Bahubali's sisters & sent a message for Bahubali with them.

Brahmi & Sundari entered the jungle. Bahubali was still in the same unwavering position doing penance. Both the sisters said to him, "Come down from your high elephant brother, 'Kevalgnan' is not attained on an elephants back". Bahubali who was so deeply involved in his meditation was astonished on hearing his sisters' words.

He wondered, "What are my sisters saying? What elephant am I sitting on? I am doing penance in this saintly posture but my sisters would not make any unfounded statements, so there must be definitely some mystery hidden in what they are saying". Upon deeper thinking within a few moments, he understood that there was a truth in what his sisters were saying. "I am riding on the elephant of pride. I will not bow to my younger brothers is my pride, isn't it? I will seek salvation on my own is my ego, isn't it? One can never attain salvation on the foundation of pride", he understood his mistake & repented sincerely. He immediately decided to go to Lord Rushabhdev & to bow down to his younger brothers. After making this decision, just as he lifted his leg to move in that direction, he attained 'Kevalgnan'.
Moral: So Friends, No matter how much younger a person is to us, if he/she is even slightly superior to us in any field, we should always respect him/her. Our ego & pride will not let us attain salvation.