Shri Lalluji Muni (later known as Laghuraj Swami) was born in a rich and respectable family in 1854 in Vataman, a village in Gujarat.  He was very happy in his life but suddenly at the early age of 25, he was caught by anemia. He sought numerous different treatments, but all failed to cure him. He resolved to renounce the world if he recovered. Strangely he recovered and after sometime he got permission of his mother for Diksha (renouncing the world).  He was initiated by a monk Shri Harakhchandji Muni, in V.S. 1940 in Khambhat.

Shri Lalluji Muni studied the scriptures and practiced various types of austere penances for five years, but he did not feel the spiritual peace that he had expected. After five years, he heard about Shrimad from Shri Ambalalbhai and had the opportunity to read His letters. A ray of hope was born within him, and Shri Lalluji Muni was eager to meet Shrimad.

Finally, during the auspicious festival of Diwali, in V.S. 1946, Shrimad Rajchandra visited Sthanakvasi Upashray in Khambhat, where Shri Lalluji and other monks were staying. Upon taking permission from his Guru Harakhchandji Maharaj, Shri Lalluji Muni went to meet Shrimadji alone. Though he was 14 years older than Shrimad he bowed down in ‘sashtang namaskar’ to Shrimadji three times at the very first meeting. 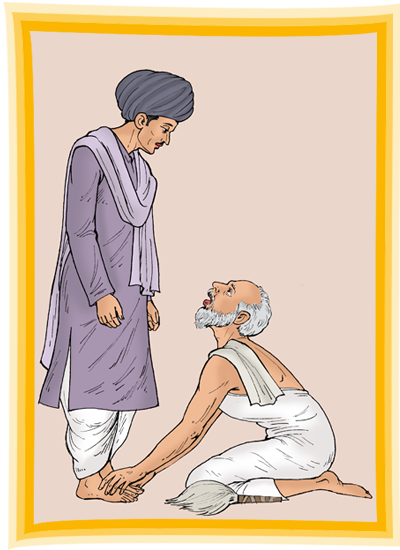 Then He expressed his desire for enlightenment and firmness in celibacy. Shrimad remained silent for some time. Then, He extended Shri Lalluji Muni’s right foot towards Him and studied the big toe, looking for a particular sign. Shrimadji immediately saw Lallujimuni’s spiritual inclination from his previous life. On His way home, He told Shri Ambalalbhai that Shri Lalluji Muni was a virtuous man.  Shrimad stayed at Shri Ambalalbhai’s residence in Khambhat for seven days and imparted the knowledge of the Self to Lallujimuni.

After they parted company, Lallujimuni’s devotional bond with Shrimadji grew as they frequently wrote to each other.  Whenever he received a letter from Shrimadji he would circumambulate it (walk around a sacred object as a way of worshipping it).

He would count himself to be extremely fortunate and read the letters with tremendous joy and excitement.  In Lallujimuni’s eyes Shrimadji was verily God incarnate.  All his life he was engrossed in his devotion.

Since Shri Lalluji Muni was a monk, so when he accepted Shrimad, a householder, as his Guru, it created opposition from his own sect and the traditionalists, who created a lot of difficulties for him. Nevertheless, Shri Lalluji Muni calmly bore the suffering they inflicted upon him, without deviating even slightly from the path of Truth that he had adopted. In fact, the more difficulties came his way,  the more his devotion for Shrimad intensified. His devotion for Param Krupaludev was unparalleled.