Narad Muni flew into the palace from the skies chanting, "Narayan, Narayan". He asked Rukshmani devi about what had happened & she couldn't hold herself back. She pleaded to Narad Muni, "Please find out where my son is… Please bring my son back to me." Narad Muni reassuringly told Rukshmani devi that he would promptly report on the child's whereabouts. 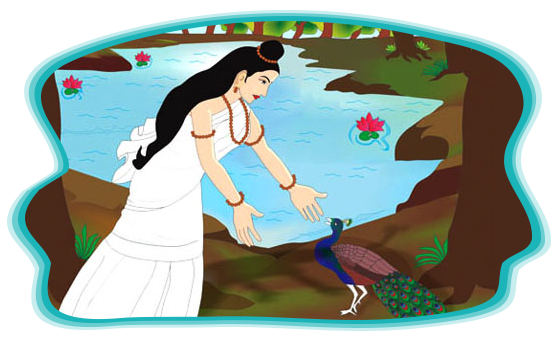 As a result of that sin, Rukshmani devi had to suffer the pain of being separated from her son in this life. A 'dev' has kidnappened her son & named him 'Pradyuman'. Now, the child will be reunited with his mother after sixteen years."

Content with Lord Simandhar Swami's explanation, Narad Muni flied back to Rukshmani devi & relayed everything to her. Rukshmani devi repented for her sin & was pacified to know that her son was safe.

Moral: You see children, if you take anybody's things without getting permission; you will have to repay it with interest in your next life. The punishment of a sin of sixteen months will have to be borne for sixteen years.