Once, there was an acharya muni named Chandraraudra. He was of a very hot temperament. He had a disciple who was very respectful & obedient. Once, while travelling towards their destination, it became dark. Since they had not reached the village, the disciple carried his guru on his shoulders & continued to walk. It was very difficult to walk in the darkness on a path filled with thorns, potholes & mounds.

Unable to see his step in the darkness, the disciple would often stumble on the dips & mounds on the road. This would jerk the muni on his shoulders. The aged muni unable to bear the constant jerks got furious & yelled at his disciple. The disciple's legs were badly scratched & oozing with blood. Just then, his foot got stuck in a deep pit & the muni lost his temper entirely. Such a mistake on the part of the disciple flared up the muni's pent up volcano of anger. He hit the disciple forcefully on his head with a thick stick that he had with him. 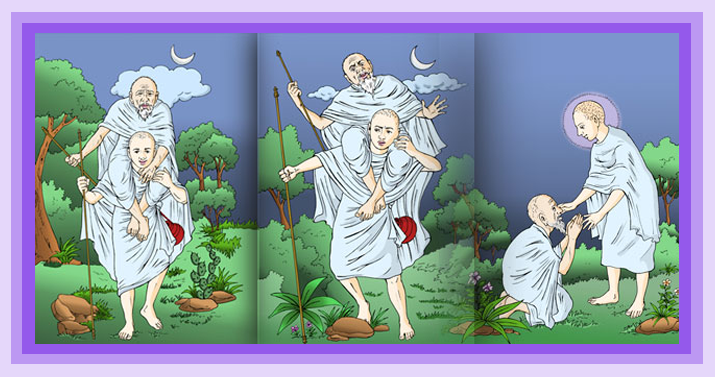 This put the disciple in a very difficult & pitiful state. He thought, "Wretched is my fate that I can't take care of my guru. He has to bear so many hardships & problems because of me!" As a result of his deep repentance, the flow of the disciple's thoughts turned pure & he instantly attained 'Kevalgnan'. Do you know what 'Kevalgnan' is? Those who have attained 'Kevalgnan' can envision & have knowledge of the whole universe.

Although it was dark, he could now see the path clearly. He walked without a single lurch in such a way that his guru had no discomfort. The muni was confused to see this. He asked his disciple, "Before you were not able to walk properly but suddenly now you have started walking with stability & ease. What is the reason for this? How are you able to find the road even in such darkness?" The disciple answered, "Gurudev, it is all a result of your grace". The muni thought, "He seems to have learned his lesson after having been hit & that's why he is walking properly now". Just then the disciple very modestly said, "Gurudev, due to your grace, I have attained 'Kevalgnan'. On the basis of 'Kevalgnan', I can see everything clearly".

On hearing this, the muni immediately jumped down from his disciple's shoulders. He bowed down to his disciple who was now a 'Kevalgnani' & asked for forgiveness for his misbehavior. The muni's sense of deep repentance at that moment also resulted in 'Kevalgnan'.

Moral: So friends, do you see how powerful can be the results of heartfelt repentance?