A Lesson for Life

All the classmates of Fenil were very cruel to him. They used to mimic, tease and taunt him about his weight but Fenil never responded to anyone.

One Friday, Fenil was playing football during the sports class. The game was intense and just a few minutes left in the game but there was a tie in the score. When Fenil was near the net, a team member rolled the ball over to him. Fenil tried his best to score the goal but missed somehow. The game was over and Fenil's team lost. 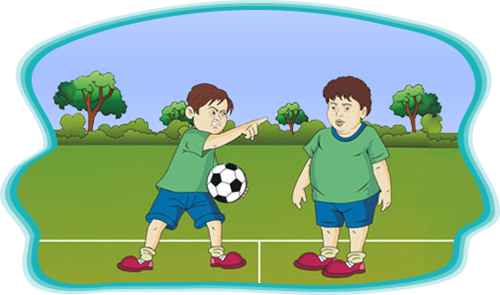 Arjun frowned at Fenil saying, "How could you be so irresponsible, Fenil?" Fenil's eyes were full of tears. A week ago, his teacher had told him that he was irresponsible for being late to class. Just a few days ago, his mother had used the word 'irresponsible' when she scolded him for not hanging out his clothes.

Fenil sat near Arjun for art class. Someone pushed Fenil and he fell on Arjun who hit his foot quite badly against the desk. The boy who pushed Fenil onto Arjun blamed Fenil for everything. When the whole class was watching, Arjun was stimulated either to pick a fight with Fenil or to ignore it.

Arjun shouted, "C'mon Fenil, lets fight!" Fenil responded, "I didn't fell down myself" but his other classmates pushed him into the fight. Arjun punched on Fenil's face and he fell down on the ground. The whole class laughed a lot on Fenil. Just then, the teacher walked into the classroom and saw Arjun and Fenil fighting "I want both of you to go out on the ground and run one mile holding each other's hands", said the teacher announcing the punishment. Both Fenil and Arjun were embarrassed but they had no choice. They went on the ground to run one mile as the way teacher said.

At some point during the course of their run, Fenil said, "I'm sorry Arjun for losing the game today because of my mistake." The bruise from the punch was still fresh on Fenil's face and his heavy weight was making him slow in running. At that point, Arjun realized his mistake. He was the one who blamed Fenil for losing the game and started the fight. He was the one who hurt Fenil. Yet Fenil never hurt him back either by words or action. Arjun looked at Fenil and it struck him that Fenil was a kind of human being who had inner values and worth far beyond any external looks.

Arjun said with tears in his eyes, "Don't be sorry Fenil, it was my mistake and I apologize. It was a team play and no single person is responsible for winning or losing. Besides we were playing for fun, neither to win nor to lose. I am very sorry for blaming and hurting you." 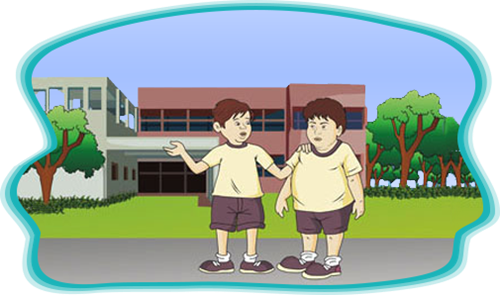 Arjun and Fenil became good friends from then onwards. It was an amazing lesson for Arjun who learned during the punishment of hand-in-hand running with Fenil just for one mile

Did you see friends, teasing hurts terribly, teasing means hurting others by speech and Dadashri says that the power of speech arises when one doesn't use even a single word to make fun of others.

MORAL: Fenil was teased by everyone but he never snapped back at anyone even when he was wrongly blamed. Friends, anyone will only tease you as long as it affects you. So, become free of its effects and see the result. Here, Arjun realized his mistake and apologized to Fenil. It binds karmas for next life. If we tease someone, it hurts the other person and if we come to know about it, we should do 'pratikraman' for hurting the God within and ask for strength never to do it again.