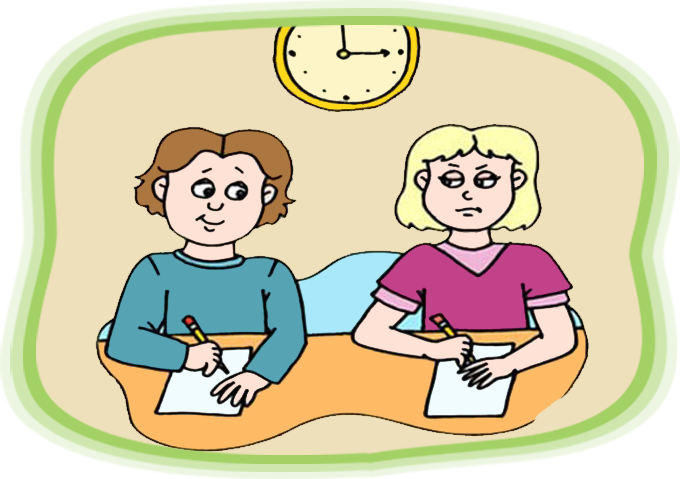 Everyone knew that Stuti was the best speller in the whole class. She could spell difficult words like "encyclopedia" and "amendment" very easily. She used to get perfect scores during each weekly spelling test.

Stuti was so confident in her spelling abilities that she had felt and decided not to study for her next spelling test. The test began. Ms. Daisy pronounced each word and then repeated it. Everything was OK until she spoke "Handkerchief". Stuti scribbled h-a-n-d-k-e-r-c-h.....now what?? i??...or…e?? Her mind was blank.

Ms. Daisy started to move on to the next word. It occurred to Stuti that Seema knew how to spell it!! Seema had written this word fifty times.
There was wide open space between Stuti and Seema. Stuti's eyes rolled to the right. There it was, spelled out in Seema's handwriting. Her eyes went quickly back to her own paper and finished the word with the letters "i-e-f".

Stuti remained tense and nervous as Ms. Daisy read the last spelling word. She had cheated just for the first time in her life. She thought, "Is this the way I want to keep my perfect record - by being a cheater?"

Frantically, she erased what she had written earlier and replaced it with what she knew was the wrong answer. She wrote "e-i-f". As her sweaty hands released pencil and passed the test up to the front, she sighed with relief. She thought, "So, what if my perfect scores are no longer intact? At least my honesty is."

Article on Consequences of lying