Little Dhairya was always involved in a fight with others. He would answer back rudely and seeked revenge. Thus, he would always end up hurting someone or the other. Almost everyone had complaints against him. Many a time, Dhairya's father would explain to him about not behaving in this manner. However, Dhairya would always escape with the excuse, "Is this called hurting others? I had no idea." 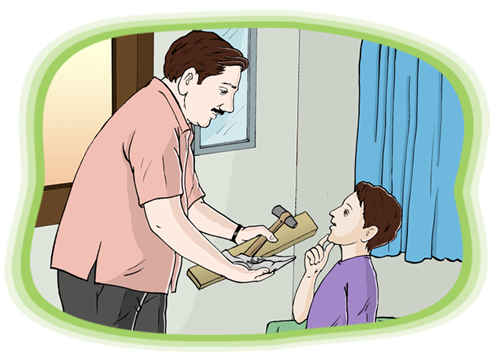 One day his father gave him a bag full of nails and said, "Dhairya, from today onwards every time you hurt someone, take a nail from this bag and knock it into the piece of wood." Dhairya curiously asked, "What will happen by doing this?" To this, his father replied, "You will experience it for yourself."

The next day, Dhairya was teasing his sister by calling her, "Shorty… Shorty…"  At the sound of this, his father beckoned Dhairya and said, "Son, teasing others is a way of hurting them." "Is that so!" asked Dhairya in astonishment. He instantly went and hammered a nail into the wood.

One day, Dhairya's friend picked up his new pen to write without asking for his permission. This upset Dhairya so much that he threw his friend's pencil box out of the window. When Dhairya's teacher complained to his father about it, his father once again explained to him that, "You have hurt your friend by doing this." 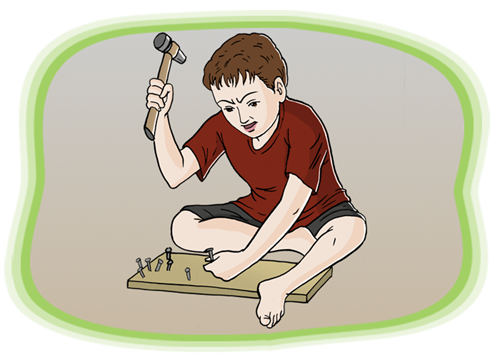 Dhairya did not like the teacher complaining to his father at all and he began to criticize his teacher within. Dhairya's father understood that he was thinking negative about his teacher, so he immediately pointed it out to Dhairya saying, "Thinking negative about others is equivalent to hurting them". That day, Dhairya hammered two nails into the wood. In this way, whenever Dhairya would lie, take others' things despite the fact that he had his own, take pride in his abilities, feel jealous or compete with others, his father would promptly alert him. Dhairya would always obey his father and knock nails into the wood every time.

Eventually, he began to recognize the different ways in which others would feel hurt by him. As he increasingly realized this, the instances in which others were hurt by him started to gradually decrease. In any case, by now he was weary of hammering nails into the piece of wood. The day soon arrived when he completely stopped hurting others. Dhairya was very happy and his father was also very pleased. 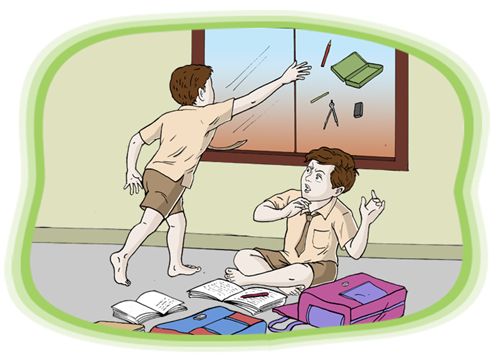 He said to his father, "Pappa, now I do not hurt anybody, so what should I do with this piece of wood?" His father very lovingly replied, "Now pull out all the nails from the piece of wood". Dhairya could not understand why his father was making him go through this exercise, and what he wanted Dhairya to learn. Nevertheless, Dhairya continued to do as his father told him. After pulling out all the nails, he went to show his father the piece of wood, "Pappa, look I've pulled out all the nails". His father said, "Good, but did you notice all the holes in the piece wood? Now, if you want to fill the holes and make the wood as good as it was before, what will you do?" Dhairya replied, "I would have to painstakingly fill each and every hole with sawdust and glue." His father grabbed the opportunity to say, "Precisely, in the same way, when we happen to hurt others, we give them wounds which do not heal by themselves quickly." 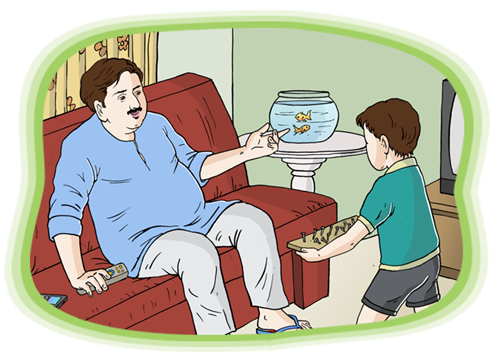 Dhairya realized that up to now, he had wounded a lot of people! So he asked his father, "Pappa, there must be some solution to this, isn't there?"

His father replied, "Pratikraman; by heartily asking for forgiveness, all wounds get healed." Dhairya understood how risky it is to hurt others and he decided from that day onwards never to hurt anybody.

Video on The story on kalam 1

Article on Should we hurt others