The Ripple Effects of Anger

The school bus would arrive at any moment. Parth hurried to a table to drink his milk. Just then Bhakti, Parth's younger sister arrived there. She took a plate for her breakfast. Her hand mistakenly touched the glass of milk and the milk spilled over Parth's uniform. 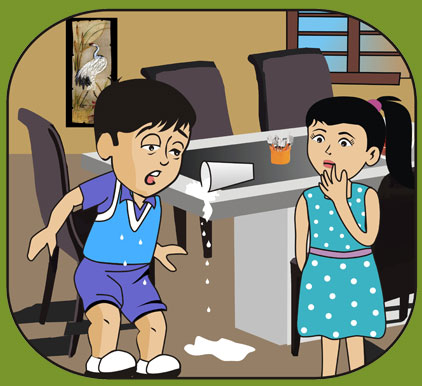 "Oh……no! Look, what have you done! Can't you look before you take your plate?" Parth screamed at Bhakti. His face turned red with anger.

"I am so sorry, Parth. I didn't mean to……." Bhakti said regretfully but Parth didn't even let Bhakti finish her apology and ran to his room to change.

"His other uniform was not ironed. "Now, what will I wear? How can I wear this stained uniform?" thought Parth, still very angry at Bhakti. He had no other option than to wear the crumpled uniform. He heard the bus driver honk outside but he hadn't even packed his bag yet. Eventually, his mother let the school bus go and dropped Parth to school.

He was praying all the way that his class teacher should be in a good mood and pardon his coming late. But no prayers of pardons seemed to work for D.K sir. Parth's punishment was to go out on the ground and run one mile. He felt very embarrassed. All the way while running, Parth was burning inside. He blamed Bhakti for his punishment and was waiting to return home and scold her.

He was very tired and exhausted because of his anger. When he returned home, he saw that Bhakti was studying for her geography test. "Chennai is the capital of Tamil Nadu", Bhakti was memorizing the capitals of Indian states. Parth entered the room and heard Bhakti's voice.

"You fool! Chennai is not the capital, Madras is the capital of Tamilnadu", saying that he snatched her geography notebook and tore her page. Parth was always convinced that he was right. Poor Bhakti collected the torn pieces of paper with tears in her eyes. This was Parth's way of getting even with Bhakti.

Just then, they heard their mother's call for dinner. "Come on, kids dinner is ready. I have made pau-bhaji today", Mummy said.

"What…..pau-bhaji?? But I had asked you to make pizza tonight!! Why don't you ever listen to me?" Parth exploded. But a stare from Mummy was enough to make him finish his dinner. He gulped his dinner as fast as he could and rushed to his room.

After some time, his father returned from work. He came to Parth's room. Parth was lying on his bed reading something. "How was your day, dear?" Papa asked. Parth broke down and told his father about his eventful day. 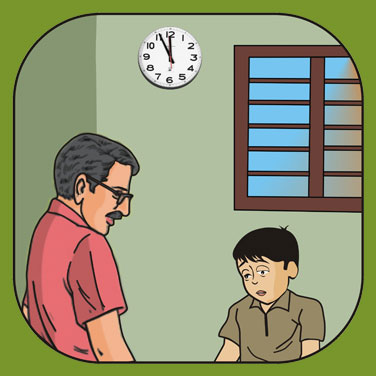 His father listened to him attentively and then calmly said, "Spilling milk was just an accident. You became angry because you felt that you incurred a loss and were embarrassed to go to school in a crumpled uniform. But have you never spilled anything in your life before? And then you felt insulted because you were punished. But, tell me, will you miss your bus if you make it a habit to pack your bag the night before?

You were burning with anger and you tore Bhakti's notebook page and hurt her. Then you exploded on Mummy because you didn't get pizza for dinner. You know Parth, a person becomes angry when things don't go his way and such a person burns from within and then hurts others. Do you like to burn?"

Parth mumbled, "No. I don't like that feeling at all. But what should I do now?"

"You should ask for forgiveness from Bhakti and Mummy because you have hurt them with your anger and you should resolve never to get angry again". Papa said. "And, by the way, the new name for Madras is Chennai!" He winked at Parth as he left the room.

Parth realised his mistake and instantly asked for forgiveness and decided strongly not to get angry again with anybody.

Moral: The person is hurt when you become angry with him & hurting others bind bad karmas, results of which have to be compensated in the next life. Dadashri says that anger is a weakness. Those who don't use anger as a weapon have sheel (extraordinary moral character).

Article : Should we hurt others

Experiment Corner : Is Anger a strength or a weakness