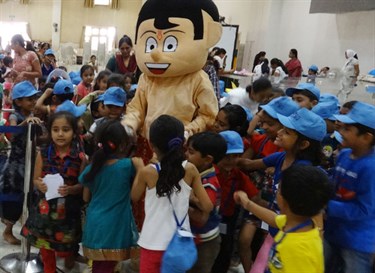 Finally the most awaited time was back at Simandhar City as a hundred and twenty eight tiny tots from different centers like Rajkot, Surat, Baroda, Vastrapur, etc., made their way to their favourite Baby MHT Fuzion organized on 19th October, 2014.

The event started on a highly positive note with everyone reciting prayers together. After having set the mood for the day, the didis enacted onstage a skit based on Rahul's character from the book 'Who will be my friend?'  All the kids intently watched the drama and befittingly grasped the take home message- 'What you like, you should do with others. What you don't like, don't do with others' The skit was followed by an interesting activity based on the same concept of togetherness and sharing. The tiny tots created their own book filled with images which showed how all of them got together and went to their BMHT sessions. This activity filled the whole atmosphere with sentiments of unity, caring, sharing and friendship.

The main highlight of this year's event was the 'Chhota Bheem' character. Kids immediately recognized their favorite cartoon character and squealed with laughter and smiles as everyone gathered around Bheem to see him more closely and feel him.

The whole event was based on the theme of spreading smiles around and this was reflected on the sandwiches too which were served as snacks. The toddlers felt extremely enthralled to see the cute smileys decorated on their sandwiches. This was followed by drama presentations by different centers based on the topic of caring and sharing. 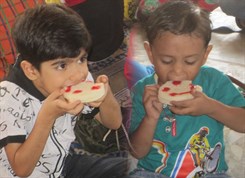 Later on, the kids were shown a short video of Pujyashree's visit to a zoo on one of his satsang tours abroad. Through this short film, the little ones got a chance to admire a whole bunch of animals; some of which were familiar but mostly unfamiliar. Everybody's eyes were glued to this engrossing video until the end. 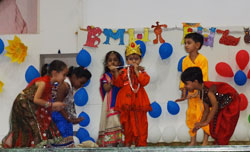 The vibrancy and enthusiasm of the day increased manifold when the children played several interesting games with their didis. And, this was later followed by a splendid dance session wherein all the tiny tots danced to their hearts content to the tunes of several energetic and lively songs.

To sum it up, we can say that it surely was a day well worth cherishing for the kids as well as their centre didis. The li'l champs not only made friends amongst themselves but also departed with the promise that they'll come back again next year.