A sweet baby-girl was born on December 2nd in 1944 to the wealthy Amin family in Aurangabad. Her parents named her ‘Niranjana’. Niranjana, being the only girl amongst Her five brothers grew up amidst special care, love, affection and attention showered upon Her by all. They all lovingly called her ‘Niru’. Niru was a very sharp and intelligent girl, who also had a mischievous side to Her.

From a very young age, Niru knew that She wanted to become a doctor, not to make money, but to help the needy. Niru studied in Mumbai and graduated with a medical degree from Aurangabad Medical College. Whilst she was in Her final year at college, Her elder brother, told Her about Param Pujya Dada Bhagwan. What appealed to young Niru were the words ‘……after attaining this Akram Vignan no worldly happiness or sorrow can affect your inner peace and happiness….’ Hearing these words made a strong impact on young Niru and She couldn’t wait to attain Self Realization from Param Pujya Dadashri. 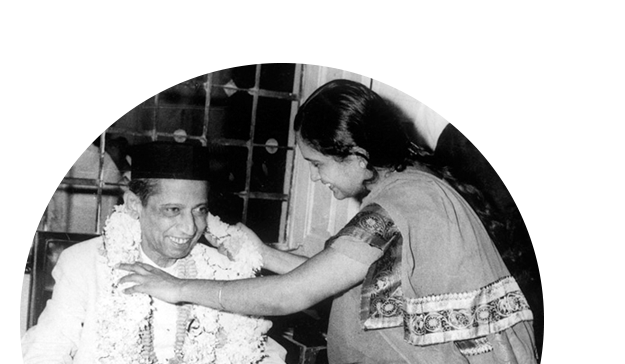 The Meeting That Changed Her Life

Finally, on June 29, 1968, Niruben met Param Pujya Dadashri for the very first time, at Vadodara, Gujarat. Instantly upon seeing Him, a strong desire arose within Her, “How wonderful would it be if I could serve Param Pujya Dadashri until my final breath!” During the first meeting itself, Niruben, in Her heart, had completely surrendered herself to the Gnani. On 8th July 1968 She took 'Gnan' (knowledge of the Absolute Self) from Dadashri.

Niruben finished Her medical education and became a MBBS doctor. She also successfully completed Her M.D. in gynaecology at Aurangabad. Everyone in the family expected young Niru to start Her own practice as a doctor; however, Niruben had different plans for Herself. She thought, “If I practice as a good and honest doctor, may be, I would heal people’s physical diseases, however, if I serve and look after the Gnani (the Self Realized One), many people’s mental, emotional and intellectual problems by Him through His unique 'Akram Vignan'.

Thus, Niruben left Her home and all its comforts at the tender age of 23 to serve Dadashri and assist Him in achieving His goal of liberating the world. She served Dadashri with the utmost devotion, day and night for over 20 years. Niruben would not only look after Dadashri’s every personal need but would ensure that everything needed for the satsang (spiritual discourse) was also taken care of. She served Dadashri like a nurse, a mother and a daughter and travelled around the world by His side. Niruben became a silent instrument in aiding His mission to impart this knowledge to the world. 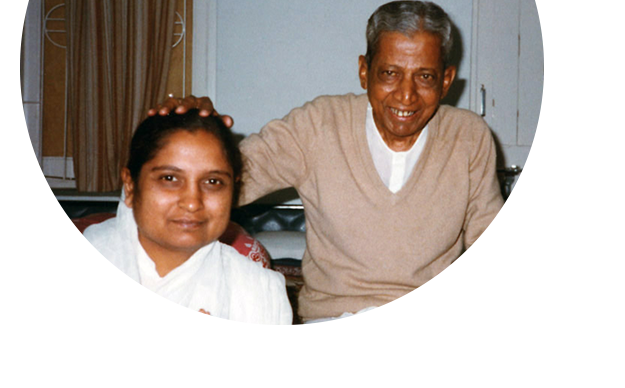 Param Pujya Dadashri clearly understood Pujya Niruma's strong desire of the salvation of the world. He began to mould Her and prepare Her to take on this mission after His demise. In 1987, during Param Pujya Dadashri's final days, satisfied with Her progress, He said to Her, "I am very pleased with you Niruben. This Niruben is a great instrument for the world's salvation. She will have to become a mother to the whole world. Whenever Niruben wants, Dadashri will speak from within." Thus, He blessed Her with His special spiritual powers so that She too could grace others with Self-realization and continue the mission that He had started. She in turn, promised to fulfill His vision of the world's salvation, until Her last breath. Because of Her unparalleled love and affection towards everyone around Her, Niru ben soon became known as ‘Niruma’ wherein ‘Ma’ means ‘Mother’.

Niruma’s Final Message to the World

Pujya Niruma departed for Mahavideha Kshetra on 19th March 2006. In her final moments, all that She wanted was, a promise from all of us, a promise to ‘Live with love & harmony with all’. Her subtle presence continues to bless everyone and provide them an inner strength to live up to the promise She had asked from us. An elegant memorial of white marble stands at Her final resting grounds within Simandhar City at Adalaj, Gujarat.

Today Param Pujya Dadashri's mission continues with the same principles of purity under the guidance of Pujyashree Deepakbhai.

Niruma had lot of love for kids and youth and She always said that,

“The current generation of children is very healthy minded. They are not opinionated or obstinate. Yes, they are quite filled with illusionary attachment, but if they are given the right understanding from childhood, then they will not only liberate themselves, but will also be able to do a lot of work for the salvation of the whole world.”

To address the needs of today’s generation Niruma used to organize “Sanskar Sinchan Shibirs” (special retreats) for children. She realized through Her vision that, by focusing on the children, Param Pujya Dadashri’s Science would spread rapidly because the children themselves would bring their parents along. She once commented, “One shibir done for children brings about changes which are much faster and stronger, than the changes observed in mahatmas (Dada’s followers) after 3-4 shibirs. The children tell us everything in the shibir; wherever they are stuck and they take home the solutions they obtain.” In order to take forward Niruma’s desire for today’s children MHT centres have been started at several centers within India and abroad.