On November 7th 1908, a baby boy was born to Zaverba and Shri Muljibhai Patel in a small town called Tarsadi, a suburb of Vadodara in the state of Gujarat, India. His parents named him Ambalal, but they lovingly called him ‘Gallo’. Ambalal grew up in the town of Bhadran, in the Kheda District of Gujarat. He was very popular amongst his friends and neighbours and was loved by all.

From the very beginning, Ambalal displayed very special and unique qualities. His thinking was wise beyond His years and He was very clever. His mother Zaverba, not only instilled the highest moral values in Him but also taught Him the importance of non-violence and right conduct. All these unique qualities are evident from all His childhood incidences.

Ambalal got married to Hiraba at the age of 16. Hiraba and Ambalal had two children, a son and then a few years later a daughter. Both of His children passed away soon after they were born. Ambalal was a remarkable husband to Hiraba and in their sixty years of married life, they never had a quarrel or dispute even once.

Ambalal had no luxuries or comforts in His life and lived in a very simple manner. Despite this, He was very different from the other children of His age group. He never found happiness in any of the material things that the other children would enjoy. He was always in pursuit of spiritual bliss. 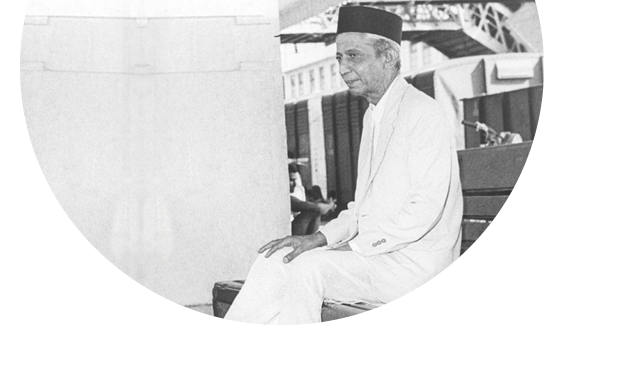 Ambalal’s only desire was to find the Ultimate Truth. This deep-rooted thirst within Him ended in 1958, on one evening in June. Ambalal was sitting on a bench on platform number 3 at the busy railway station of Surat (Surat is a city in south Gujarat, a western state in India). He had just finished His evening meal. What transpired within the next forty-eight minutes was phenomenal. Ambalal attained spontaneous self-realisation and He became the Lord’s living instrument for the salvation of humankind, through the path of knowledge. All the world’s spiritual questions were answered during this phenomenon.

Ambalal was transformed into a fully enlightened Gnani Purush. Through this divine original scientific process, He in turn was able to impart this knowledge that had manifested within Him to others in just 2 hours. Those close to Him, recognizing the transformation that had occurred within Him began to address Him as ‘Dadashri’ and ‘Dada Bhagwan’. Param Pujya Dadashri used to go from town to town and country to country to give satsang (spiritual discourse) and impart the knowledge of the Self to those who were wanting.

Before Param Pujya Dadashri left His mortal body on January 2nd, 1988, He had moulded Pujya Niruma and Pujya Deepakbhai to carry on His mission of spreading this amazing knowledge for the world’s salvation. He had blessed both of them with special divine powers that would enable them to carry on His mission even in His physical absence.

Dadashri was extremely fond of kids and youth. He would bestow blessings upon them wherever He travelled and all the kids in turn liked to sit by the feet of the GNANI. He used to say,

“Today’s young generation feels suffocated due to lack of proper guidance. They are pure and clean than their predecessors in all respects. All they need is someone who can show them the right path. Once achieved, they will revolutionize the whole of India. This will happen soon…very soon.”