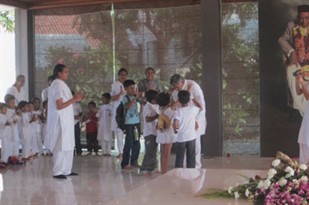 During the auspicious festival of Diwali, Baby-MHT fusion was held at Simandhar city on 25th October. This annual meet included all three Baby-MHT centres - Rajkot, Baroda & Simandhar-City.  The theme of this year's Fusion was, "Not to hurt anyone". Fusion took an electrifying start with Pujyashree's darshan at Pujya Niruma's Samadhi. 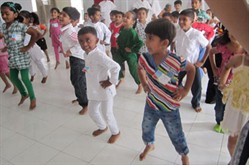 Then, in Amba School's hall, the session started with an energizing warm-up exercise, followed by a movie named "Tinker bell" which depicted the themes of "teamwork" and "how to help others". The older children enjoyed watching the movie, whereas the younger children played with co-ordinator didis'. 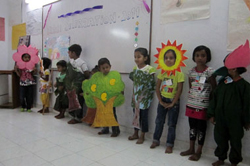 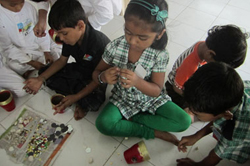 Finally, the B-MHT Fusion ended with a lot of pomp and celebration and was enjoyed by each and every member of B-MHT.