The occasion of Ganesh Chaturthi brought with it some more fun, excitement and bhakti time for the babies. The toddlers yet again were ready to celebrate this festival with a difference.

After their routine Trimantra and Nav Kalams recitation, it was story time for the babies. Didi 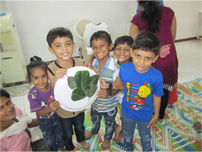 s shared with them the story of Ganesh Bhagwan and his brother Kartik. "Ganesh and his sibling Kartik quarelled among themselves about who is stronger and mightier of the two. They agreed that whoever travels around the world and returns first will be considered to be the mightier than the other. Kartik started his journey on his vehicle, the peacock that started to move swiftly. However, the great and wise Lord Ganesh went to his parents- Lord Shiv and Devi Parvati. He took a turn around them and sat down. When his brother Kartik returned with a confident and victorious smile, he found Ganesh still seated there so he asked him to accept defeat. To this Ganesh replied, 'I have taken a round of that which means the world to me - my parents!' 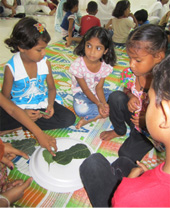 The kids were amazed to learn about Lord Ganesh's wisdom 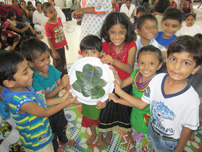 and reverence for his parents. They also discovered that before the start of any auspicious occasion, Lord Ganesh is always worshipped first. Following the story, an exciting activity was awaiting the tots. Making Ganeshji out of Peepal leaves!! As the kids decorated their little Gods, colors of devotion were reflecting on their faces. Like every event, this one too had a pious and musical end. Everyone sang Ganeshji's arati in unison. The kids then made their way to the snacks room. Through amusement, the seed of devotion and worship got delicately instilled in the little lads.