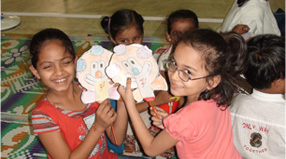 Like every summer, this one proved to be a resounding success for Kids Summer Camps across India. As many as 1850 kids aged between 7 and 12 years, participated in these regional camps held in Mumbai, Baroda, Bhavnagar, Surat, Rajkot, Simandhar City, Bhuj, and Hindi camp - Simandhar City.
As previously mentioned, the main goal of the Dada Bhagwan Kids camp is to sow some good values of life in children using the "Learning with fun" method. This year was no different.
Again, the children were divided into two groups: 7 - 9 years, and 10 - 12 years. Both groups enjoyed learning about:

-    the meaning of Trimantra  - through a craft activity,
-    significance of the Nispakshpati Trimandir - through Drama,
-    Adjust Everywhere - through experiments.
The latter two were a hit amongst majority of the kids.
The younger group also got an insight into the life of Sant Purush Saibaba; whereas the elder group on Swami Vivekanand. These were presented to the kids using powerpoints, dramas, audio-visual clips - thereby making it more interesting for them.

Click here to catch a glimpse of our future generation partaking in the bliss of devotion for the Lord in various ways, as well as relaxing with fun yoga dances, playing games and relishing ice-cold kulfi's in the scorching summer heat!