On February 26th, 2011 an exciting & fun Kids Mini Camp was held in NJ. For children who were bored of all the snow & cold, the Kids Mini Camp was warm & refreshing. It was all about games, fun, videos & gifts with learning a new thing like 'Humanity'.

The camp started with fun ice breaker games to help the children remember each other's names. Next, they had videos & activities to emphasize four key points:
1. Respect your elders: A short video was shown followed by a discussion about whether the children respect their elders & how. 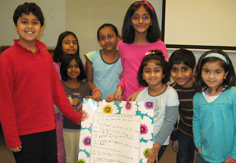 2. Do not hurt anyone: A video presentation with posters was projected depicting how we hurt others by our mind, speech & body. This was followed by an activity where the children were divided into teams & given poster size sheets to write down incidents where they may have hurt someone by their thoughts, speech or actions. The more points a team wrote, the higher their chances of winning. A discussion about these points led to realization of their mistakes & they did pratikraman for those mistakes. 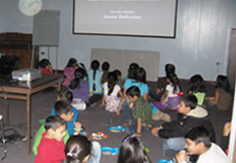 3. Put yourself in someone else's shoes: A video was used to help the children consider feeling of others. After this, the children engaged in case studies that encouraged them to think from the point of view of another person.

4. Help others wherever possible: A general discussion about how children can help their family, friends & teachers in their daily routine ensued. The children were encouraged to think wider, 'help the world'. 'Can I?' was their question & 'Why not!' was the answer the coordinators gave as they showed the children what amazing things other little children have done! 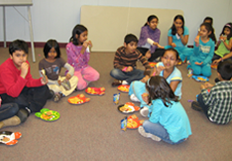 The children played Pictionary & enjoyed yummy snacks. After this, the children were shown the videos & exercised the 'Be Green' game & taught to appreciate the concept of 'giving others what we like to receive' & 'recycling'.

Prizes!! Everyone got something... each child left with a photo frame that had a picture of him/her in it. "Everyone was considered a winner & received a 'goodie bag' as a prize!" What a wonderful way to end the day!! Be sure to join the next Kids Mini Camp!!