Do you know that Simandhar City currently has three batches of Lmht's? Let's see what happened in Simandhar City at this year's Lmht (Batch 2) Annual Parent's Meet… 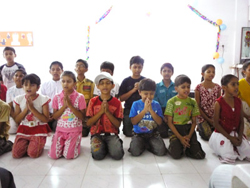 The event started with the Trimantra & a short prayer followed by a solo dance performance on the importance of getting protection from the Gnani. After that, a short video clip was shown to all parents summarizing different activities & sessions in which their children had participated throughout the year. The Lmht's & their parents enjoyed watching the video clip & they mused over memorable moments. 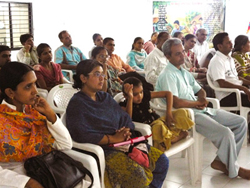 Each child made a promise to his/her parents which he/she resolved to keep. The promise was something that the children knew which would make their parents happy, for example, one child promised his parents that he would reduce one hour of the total daily time spent watching TV while another child promised his parents that he would do at least one thing every day that would be of help to his parents. At the end of the movie clip, the children handed over their hand-written promises to their parents.

The parents were amazed with their child's promise; some parents even shared their experiences that the child had actually started following his/her promise a week before the Parents Meet.

Click here to read an experience of one of the parents.

Jevin has learnt to do Pratikraman on the spot. He touches our feet every night before sleeping. He has learnt to let go. He shares his favorite things with his friends who don't have it. He has become confident & learnt positive attitude in life. He tells us about Simandhar Swami, Stories, Vyavasthit, Hisab & Nyay. He tells us about four Gaties of life & about Moksha.
Amiben Shah, Simandhar City

Everybody then enjoyed delicious dinner & the children enjoyed especially the pastries & ice-cream. After this, they all played games which were designed in such a way that the parent & the child had to work as a team to win the game. 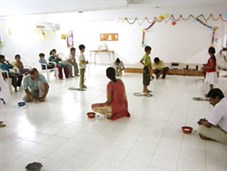 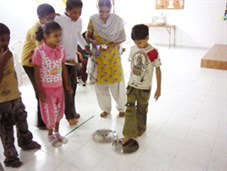 Everybody left with smiles on their faces…