It was time again for the young LMHTians at Surat to rejoice as it was Parents' Meet at their very own Parle point, Surat Center on 22nd February, 2015.

The event started in a very unique way by tying 'Rakshapotli' to the parents and later on by applying 'Tilak' on their foreheads by the kids themselves. 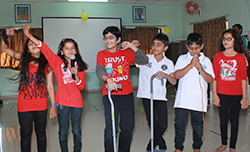 The program commenced on a very high note with the recitation of Trimantra. The little ones then danced to the tunes of the prayer song- 'Antaryami Parmatma Ko Naman…..' This was followed by a skit on the theme of 'Accept yourself as you are!' This was depicted effectively through a story of a fat boy who would often become a laughing stock among friends and hence would always feel embarrassed of himself because of his size. And, then a situation arises when his size proves to be a blessing as he could help somebody in his hour of need. At the end, the boy learns that he should not be on diet but instead should have healthy food rather than junk food. 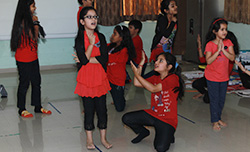 This was followed by a dance performance by the tiny tots on the pad - 'Naani aankhon ma mota che sapna…' Everybody present there thoroughly enjoyed seeing the toddlers tap their feet to the melodious music.

After this, it was time for another skit on the topic- 'Being helpful to others'. The concept was very beautifully presented through a race of handicapped kids wherein one of them falls down in between the race. And, all the other children help him get up without bothering about their own victory in the race. In the end, they all touch the winning line together. 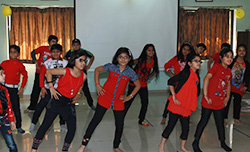 Next on the list was the display of worksheets and other craft activities done by the kids round the year in different sessions. The satisfaction of the parents with their kid's performance in the LMHT sessions was clearly evident on their faces.

Moving further, it was fun time for parents where a game similar to the Musical Chair was played where instead of the chairs, kids stood in a queue and parents had to grab their hands. And, on elimination, the parents were asked questions like- 'What is the favorite subject of your child?', 'His favorite TV show?', 'Names of his friends?' etc. This was a novel way of helping both parents learn more about their children. 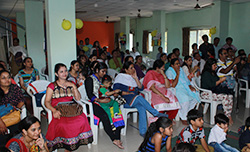 Finally, the day concluded with the young MHTians rhythmically performing with their parents on the famous Bollywood song- 'Yeh tou sach hai ki bhagwaan hai…' This was indeed the touching moment for everyone present there.

Thereafter, the li'l ones had a brunch together with their parents.It was indeed a day full of fun for both the parents and their children!