We often recognize people with the qualities they possess. Some of the commonly recognized qualities are honesty, benevolence, humility etc. But do you know that 'Nobility' is also a quality that a person can possess? Infact there's a special award known as Nobel Prize that is given out every year to people who've done something for the betterment of the mankind.

Having said so much about nobility, let us now understand more about it.

Dadashri says that, nobility means to be big-hearted. To spend whatever one has on another person without a moment's thought, that is called Nobility.

Qualities of a noble person

• He always accepts good about others heartily, thinks about the welfare of everyone and not just himself.

Doesn't this sound wonderful? The virtue of nobility is of importance if one wants to progress ahead in life. There are some splendid facts related to this amazing quality. They are-

• It is the law of nature, that the more big hearted you are, the more you will keep receiving, and the more narrow minded you become, the less you will receive.

• Everyone has something good in them. When we heartily appreciate the good qualities of others that is called a 'noble mind'.

The opposite of nobility is narrow-mindedness. Being narrow-minded means whatever one sees, he starts calculating his own benefit. Having an attitude like this not only gives unhappiness to one's own self but also makes others unhappy. 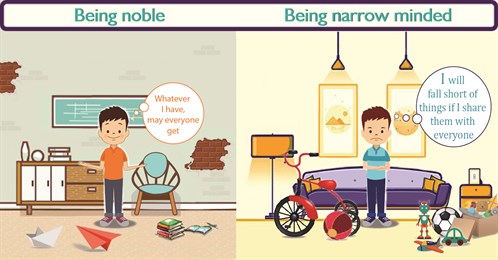 Aren't you all feeling curious to know how can one develop the quality of nobility within themselves. Read on to know more-

• As we observe other person's noble mind and appreciate this quality and accept that, "May I also be like this," then our narrow mindedness starts fading away.

• To develop nobility, start with yourself. Use yourself for others. For example, if mummy has asked you to bring some vegetables then you should ask your neighbors, "I am going to the market, do you want something?" In this way, if we do work for other people, that would be considered as having used yourself for others. 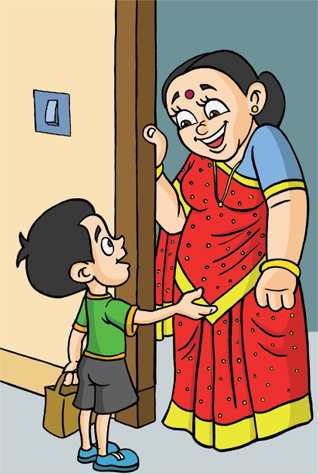 A living example of nobility is Pujya Niruma who spent her whole life giving happiness to others with whoever came in her contact.

So friends, would you also like to be identified with this fabulous quality of 'Nobility'?

Moral story- Sharing happiness with others

Moral story- Diwali with a difference