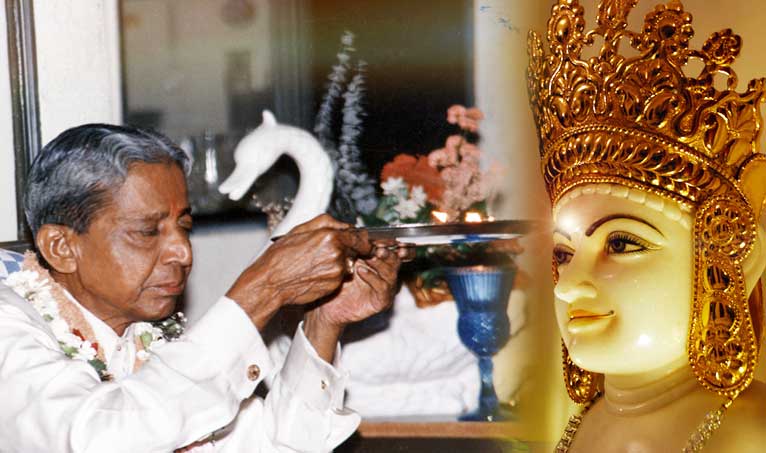 One day, Dada went to Simandhar Swami’s temple in Mehsana together with thirty-five to forty mahatmas. Their priest told Dada, “Dadaji, you do the ‘aarti’ today.”

Dada said, “I will do the ‘aarti’, but all these people here will recite our ‘aarti’ and not yours.”

The priest said, “We recite our ‘aarti’ every day, but today you recite yours.”

…And then tears of grace (nectar) started to trickle down the Lord’s eyes. Dada noticed that tears of nectar were dripping from Simandhar Swami’s eyes. But he did not say anything.

After the ‘aarti’ Dada returned to the place where His accommodation had been arranged.  In a little while, the priest came running to Him and said, “Dada, what magic have you done today that the idol has changed so much! Tears have never rolled down the Lord’s eyes. This is the first time this has happened after the Lord’s pratishtha (installation of life). What have you done that nectar is flowing from the Lord’s eyes?!  ‘We’ have never seen this happen. What magic did you do when you did the ‘aarti’? ”

Dada said, “ ‘We’ have not done any magic. The ‘aarti’ was naturally done, and this is what happened. Everything can happen. It is not scientific, but it is the work of celestial beings. During ‘Our’ ‘aarti’ the celestial beings are present, but you can’t see them. The celestial beings come and do their work in a subtle way.”

See the importance of doing ‘aarti’!