This incident happened in December 2002 during the ‘Pran Pratishtha Mahotsav’ at the Adalaj Trimandir. The ‘Pran Pratishtha’ was just two months away. The architects and engineers were worried because there was a lot of pending work. They requested to postpone the ‘Pratishtha’ (inauguration).  Niruma said, “How can that be possible? Five hundred mahatmas coming from abroad have already booked their flights.” Instead of having these negative discussions, let us chant ‘Dada Bhagwan Na Aseem Jai Jai Kar Ho’ for one hour each night.” Thus, Niruma remained extremely positive.

Thereafter, Niruma investigated all the areas of concern and discovered that, sufficient labor wasn’t available and the existing laborers weren’t enough to carry the work load. Niruma gave an excellent solution to this problem, saying, “Let’s serve proper snacks and sweets to the laborers’.” Everyone suggested that the snacks should be obtained from the market. To this Niruma responded, “No! Give them hot freshly cooked snacks. I shall handle all this. You don’t need to worry.” 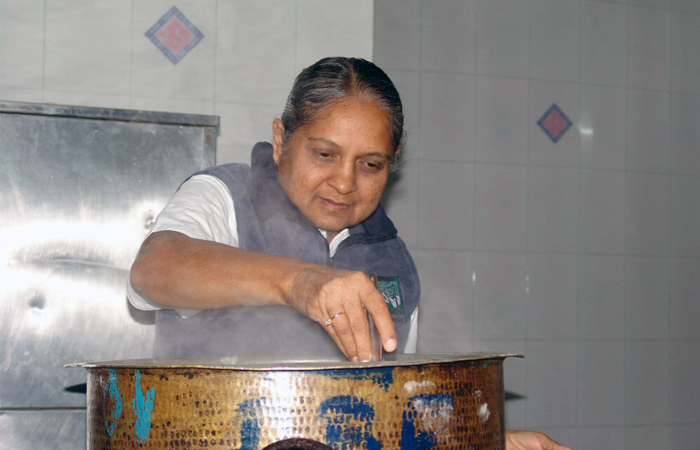 Niruma would decide on the daily menu. Pakoda, vada, bhajia, and pauva etc was served, among many other varieties of snacks. The number of laborers increased exponentially to a thousand working round the clock, from a meager fifty to a hundred initially. Thus, a task that dragged out for one and a half years was completed within a month or two. Almost all the work was done by the date of the ‘Pran Pratishtha’ without any hurdles and all three domes were erected. On the basis of her positivity, she had developed great insight. The laborers experienced Niruma’s pure love while enjoying the hot snacks and developed a deep sense of belonging for the temple. They felt like it was their very own temple.