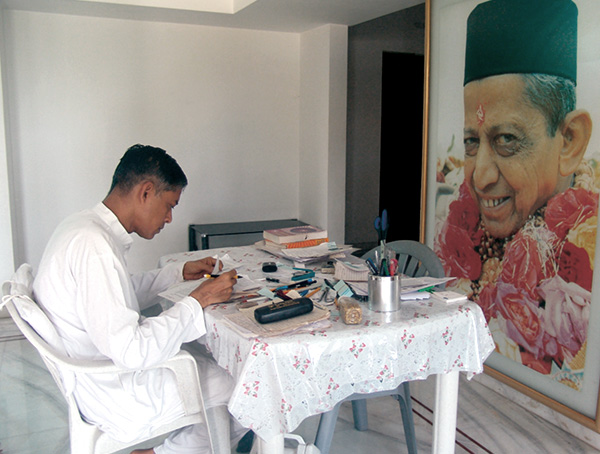 Param Pujya Dadaji would always tell Pujya Deepakbhai, “You have a very high level of the virtue of ‘sincerity’. This will take you all the way to Moksha.” So let’s see a glimpse of Pujya Deepakbhai’s sincerity.

Gradually, Dadashri’s speech began to be recorded on audio cassettes. So, Pujya Deepakbhai began to note down the speech by listening to these audio cassettes. As new people started joining seva, Pujya Deepakbhai would involve them in the seva of noting down Dadashri’s speech. Gradually, as requirements in other seva departments increased, the new people would move from this seva to other sevas. Even then, Pujya Deepakbhai would not only let them join other projects but would also finish the incomplete work with just as much diligence and dedication. Dadavani, Aptavani and many other book collections have been published by Pujya Niruma and through all this work Pujya Deepkbhai has always stood steadfast in doing the work with Niruma. In this way, for the past 40 years, he has been sincerely working on Dadashri’s speech with utmost dedication.

And what about us, can we even work on one thing continuously for four days?