Isha and Nisha were two sisters who were very close to each another.  They would always study, play and eat together and would thoroughly enjoy each other’s company.

Life went by happily for the two sisters. Because of the pressure of studies, they couldn’t spend enough time together. They had made many new friends at school and tuition classes. Due to this, the rift between them increased and they began to squabble and clash over minor things.

Once, their parents were contemplating between buying a laptop or a scooter. 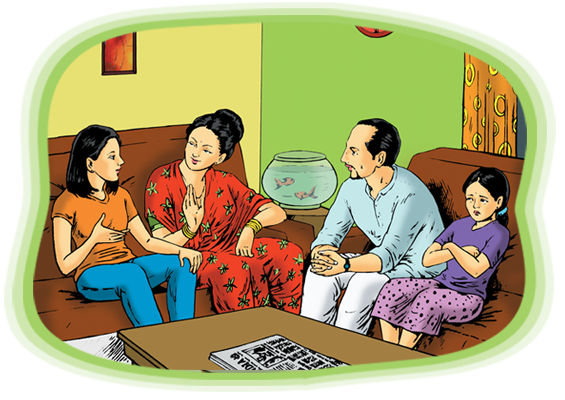 “A laptop. All my friends have laptops. And it will be useful in school and for studies as well.” Nisha said quickly.

“There’s no need for a laptop.” Isha interrupted Nisha saying, “Imagine how much time I will be able to save if I use the scooter to go to school!”

In this way, a difference of opinion arose again between them. Eventually, their parents decided to buy a scooter.

“Nisha dear, we will buy you a laptop when you start college.” Mummy consoled her. Nisha was so angry with Isha that she stopped speaking to Isha. They didn’t speak to each other for about a week.

After few days, another similar incident happened. After the sisters’ exams were over, their father decided to take them on a holiday.

“Where shall we go, girls?” Papa asked with enthusiasm.

Considering all the other factors, their parents decided to take them to Rajasthan.

“Nisha, we will go to a hill station next year. This year, let us all go to Rajasthan.” Mummy tried to reason with Nisha. But, Nisha became very upset with Isha.

“Go, I will never speak to you from now onwards. You always get things done your own way,” said Nisha, as she ran to her room crying.

Even after reaching Rajasthan, Nisha wandered around everywhere with a frown on her face. Her father decided to take her for a camel ride one evening in order to cheer her up. Meanwhile her mother and Isha made a plan to go shopping to the market. Just as they were about to enter the hotel room after shopping, mum received a call from Isha’s dad.

“What?” Mummy’s forehead wrinkled and tears started rolling down her cheeks. Isha figured out that some mishap had occurred. She waited anxiously for mummy to put the phone down.

“Nisha fell down during the camel ride. She has been hurt badly. Papa has taken her to a nearby hospital,” said mummy, wiping her tears. 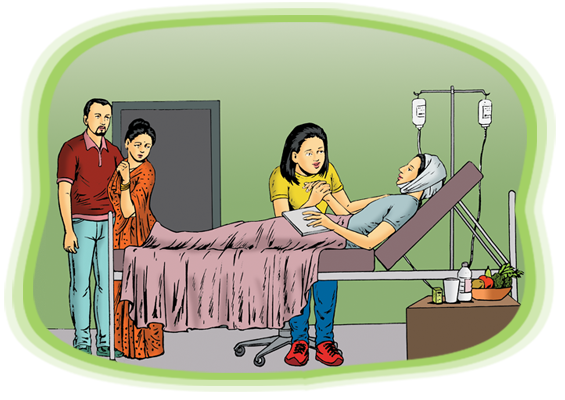 “What?” Isha’s heart started pounding. On the way to the hospital, Isha started having all sorts of thoughts. Nisha words started echoing in her ears, “Go, I will never speak to you, from now onwards!” and upon remembering these words tears started streaming down from her eyes.

They both reached the hospital. Nisha had been taken to the operation theatre. Isha started recalling all the beautiful moments that she had had with Nisha from their childhood till date.  At the same time, she also felt remorse for all the squabbles and situations where they had stopped speaking to each other.

After a little while, the doctor appeared. Placing a hand on their father’s shoulder, the doctor reassured him saying, “Nothing very serious. There is a fracture in the jaw. It will take two to three months to heal. To tell you the truth, your daughter has had a narrow escape! It would have been a serious case if she had suffered a head injury.”

When Nisha regained consciousness, she saw Isha sitting there holding her hand. She tried to say something, but couldn’t open her mouth. She gestured to her mother to give her a pen and paper. She wrote down something and gave the paper to Isha.  Isha started reading, “This fracture feels less painful than the burden of not speaking to you.”

Upon reading this, Isha broke out into tears. She patted Nisha’s hand with love and they both smiled faintly at each other.