Rushabhdev Bhagwan was the first Tirthankar of the present set of twenty four Tirthankars. Let's read the events of one of his previous births. This instance is of his fourth incarnation after he gained 'divine vision'.

A son was born to King Satbad & Queen Swayamprabha. They named him Mahabad & his strength was synonymous to his name. He had also mastered in various arts. The prince who had been brought up with lots of love & splendor was now a young man & his parents had deep faith that he was capable of handling the kingdom. 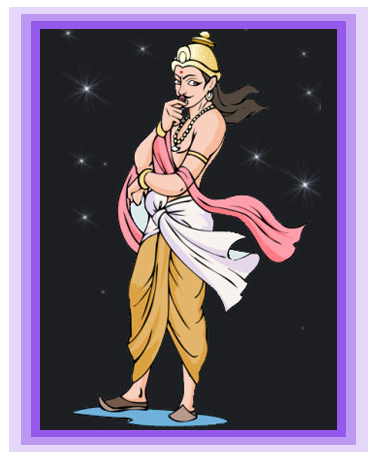 Therefore, the King & the Queen took initiation under the guidance of God & departed for penance in the forest. Consequently, Mahabad came to be the King.

King Mahabad had five to six ministers. Other than one minister named Swayambuddh, the rest of the ministers were under bad influence. They spent their lifetime enjoying worldly pleasures, all of which influenced King Mahabad as well & he too started accompanying them & started enjoying these activities. With the King getting into bad company, there was chaos in the kingdom. Minister Swayambuddh could not bear to see all this.

He was very pious & religious man. He had attained 'divine vision' & was living with the goal of attaining Moksha while fulfilling his duties as a minister.

One day, minister Swayambuddh went to pay his respects to a monk. The monk had 'avadhignan' which means he could see all the previous events as well as future events to come (such a gnan was possible in satyug).

The minister shared his concerns with the monk. He described the King's way of life & wondered where the kingdom was headed. All of this weighed heavily on him. With the help of 'avadhignan', the monk looked into the future & replied, "Your King will have a change of heart & he will soon become a divine soul. He has only one more month of his life span left to live". On gaining this knowledge, the minister bowed to the monk & immediately made his way to the King. 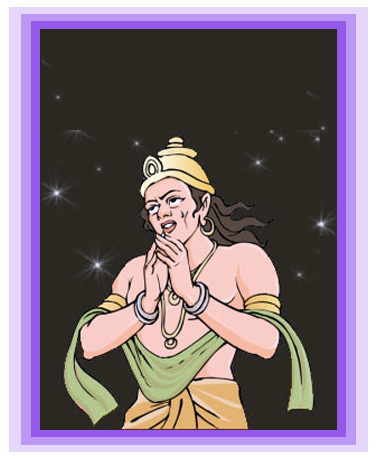 He gathered the courage to counsel the King amongst all the courtiers in the court & told, "Oh King! You are committing a great blunder by leading this materialistic life. All these temporary pleasures shall soon come to an end. So, please follow the path of self-realization". To this, the King replied, "I shall do that when I grow old. Right now, let me enjoy my youth". The minister therefore related the entire episode of his talk with the monk.

Upon hearing that his end was not far, the King & his other ministers were shocked. The King realized his folly. All his misdeed & sins started floating before his eyes. Wondering how he could be free of his sins, the King fell into a dilemma.

Minister Swayambuddh who himself had 'divine vision' reasoned the King & told, "Oh King! Don't worry. It is possible to be free from all sins, if one repents wholeheartedly & ask for forgiveness for each misdeed. Thus, the King started 'pratikraman' for the sins he had committed. He sincerely asked for forgiveness by recalling each person involved & thus, became free of his sins. He passed away after a month & was born as a Deity in the celestial world.

Moral: So friends, don't remain in the false understanding that one should follow the path of salvation only after growing old; death can come at any time. It is possible to wash away all the misdeeds & sins one has committed by wholeheartedly asking for forgiveness for them.