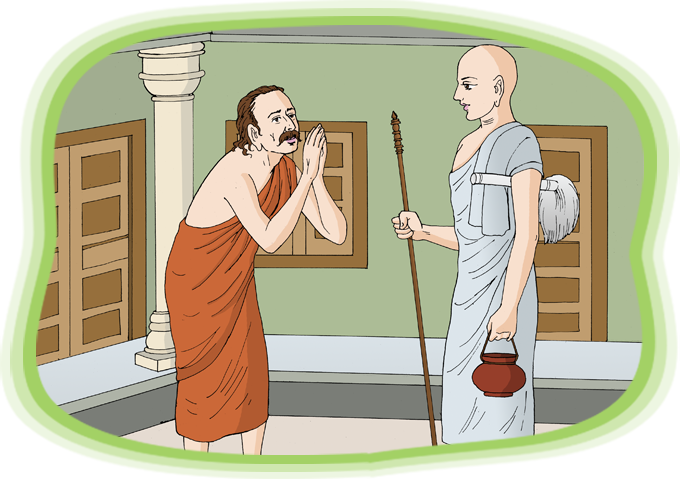 In the kingdom of Magadh, there was a village named Vanijyagram where a very wealthy man named Anand Shravak lived. He was married. He had four crore gold coins hidden underground, another four crore invested in business and yet another four crore in household possessions. Moreover, he owned four cowsheds with a total of 40 thousand cows. He was a very intelligent and able businessman; as such many people would approach him for his advice. He had a beautiful wife named Shivnanda. At the age of 70, he still had no knowledge about 'Vitraag Dharma'. During that time, one fine day, Lord Mahavir arrived at his village. Anand joined the thousands of people who gathered to hear the Lord's divine speech. The Lord spoke extensively about Shravaks (one who practices true religion and leads his whole life in accordance to the Lord's teachings) and Saints.

After a long period of time, Anand had the inclination to perform severe penance.He invited all his near and dear ones for a feast, and in their presence handed over the responsibilities of family welfare to his eldest son and then set off to begin severe penance. As a result, he attained 'avadhignan' (the knowledge that allows one to envision up to a certain limit, clairvoyance). With this knowledge he could see in all four directions within a certain limit. Besides this, he also looked high above into Saudharm Devlok (the name of a celestial world) and down below into Ratnaprabha Narak (the name of one of many hells). Having seen all this, he was quite pleased. Subsequently, he had the strong desire to meet Lord Mahavir. 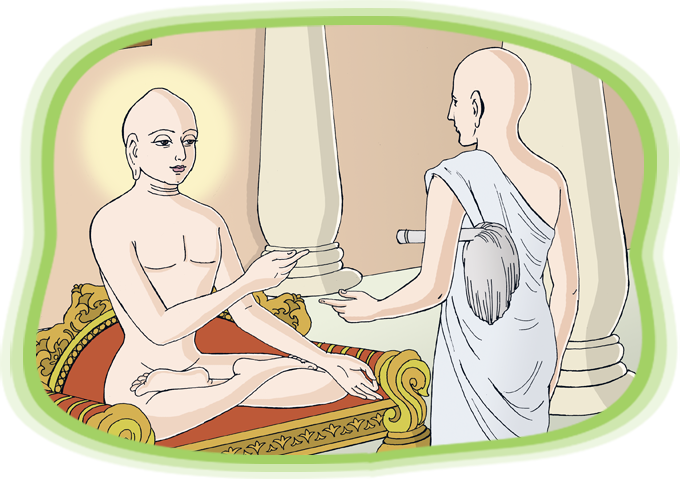 By good fortune, Lord Mahavir happened to arrive in the same village. Gautam Swami who was out in search for food offerings heard of Anand's 'avadhignan' from people. Gautam Swami went to Anand's 'paushadshala' (place of penance). Seeing Gautam Swami approach, Anand bowed respectfully and politely asked, "Maharaj! Can a Shravak attain avadhignan without taking up Sainthood?"

Shri Gautam Swami replied in affirmation, "Yes, it can happen." To this Anand said, "Lord! I have attained that gnan." Upon hearing this, Gautam Swami fell into doubt. He said, "Anand, a Shravak cannot envision so much. So repent for the lie you have uttered."

Anand thought, "He is my guru. This time, he is mistaken but to tell him, You are making a mistake would be inappropriate. It is only right that I speak to him politely because he is my guru." After these thoughts, Anand said, "Maharaj! Should one repent for lying or for speaking the truth?" Gautam Swami replied, "For lying." Anand continued, "Then it is not necessary for me to repent." Hearing this, Gautam Swami walked away. He went to Lord Mahavir and related everything. The Lord said, "O Gautam! What Anand says is true. You are mistaken. Therefore, go to Anand and ask for forgiveness." Gautam Swami immediately went to Anand Shravak and asked for forgiveness for his mistake. 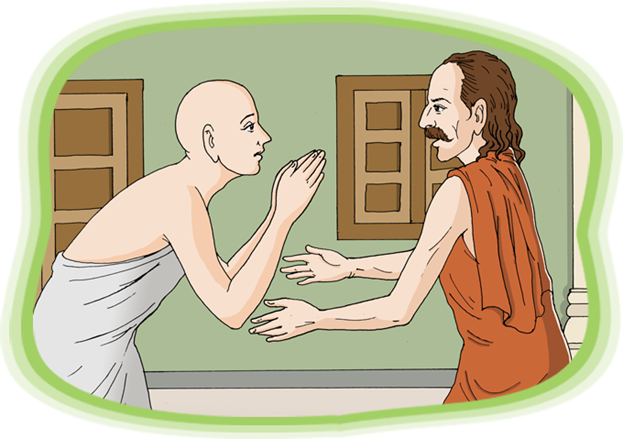 Well friends, do you see how Gautam Swami's param vinay (perfect humility) for Lord Mahavir was of the highest degree? Upon the Lord's advice, without even the slightest use of his 'buddhi' (intellect), Gautam Swami immediately went to Anand Shravak to own up for his mistake. Although he was the senior most disciple of Lord Mahavir, he was so 'laghutam' (humble) that without any reservations or hesitation, he immediately asked Anand Shravak to forgive him for his mistake. He was so aware about his mistakes! On the other hand, Anand Shravak's 'vinay' (humility) for his guru is also commendable. Anand did not lose 'vinay' (humility, respect) for his guru even though his truth was doubted.