This incident had happened during the time of Lord Rushabhdev (the first Tirthankar of Bharat Kshetra). His grandson named Marichi, the son of Chakravarti King Bharat had accepted monkhood under Lord Rushabhdev. It was summer time & they all were travelling on their feet from one village to another. Marichi was finding it uncomfortable walking bare-footed due to the heat. Upon that, the wind was continuously blowing hot air giving a burning feeling to their bodies. Bad odor started emitting from their bodies due to sweat. All this made him think, "It is difficult to lead a life of a monk. Also, it is not advisable to return home for the sake of our prestige." This made him find a middle-way to ease the situation.

Taking few liberties, he still remained a monk & wandered with all. He would set his camp somewhere nearby to Lord Rushabhdev's place of stay. Thus, he started living as neither a monk nor a householder. However, due to high regards for Lord, he would always guide others who came to his shelter seeking for true religion to go to Lord Rushabhdev only. 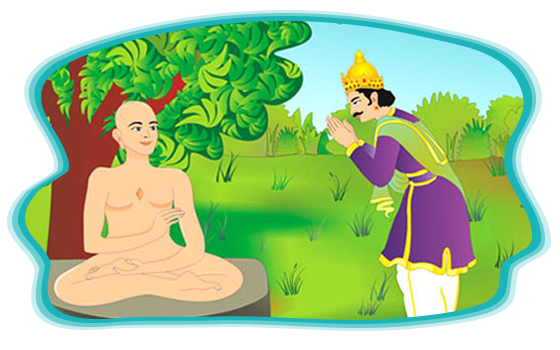 One day, Chakravarti King Bharat came to pay his homage to Lord. After having heard Lord's spiritual discourse, he humbly asked a question, "Is there any soul, present with us who shall be a future Tirthankar in this time-cycle?" Lord replied, "Yes, your own son Marichi is destined to be the 24th Tirthankar of this time-cycle & will be renowned as Mahavir. Prior to that, he will also become the first Vasudeva named Tripustha & later a Chakravarti named Priyamitra."
This overwhelmed the King & he set to pay homage to Marichi. He exclaimed, "I bow to the one who shall be the first Vasudeva of this time-cycle by the name Tripustha, then a Chakravarti King & finally the 24th Tirthankar too. I bow to your rank of a Tirthankar!" & saying so, he took three rounds in devotion around Marichi.

Marichi felt very delighted. He thought to himself, "Oh! I will be renowned as the first Vasudeva in all Nine. Then, a Chakravarti King & finally, the Last Tirthankar of this time-cycle! My Grandfather is the first Tirthankar, my father is the first Chakravarti & this makes my dynasty the best amongst all. Like the Sun that is superior amongst all celestial bodies & the Moon that is superior amongst all the stars!" This made him feel proud of his dynasty to such an extent that he got bound by demerit karmas leading to birth in lower grades for the next lives.

Moral: Thus, you see friends; it is dangerous to boast over one's dynasty leading to birth in lower grades. Thus, boasting & pride leads to a downfall.