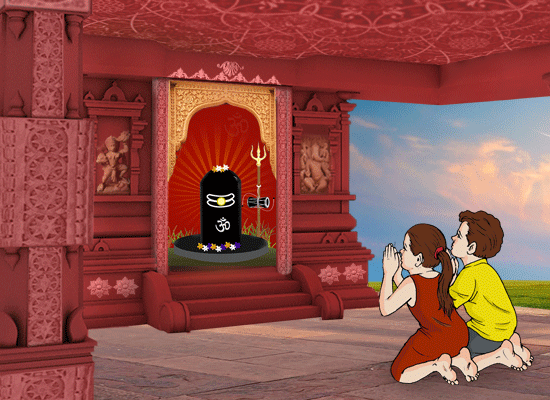 Generally, Lord Shiva is known by many names such as Bhole Nath, Mahadevji etc. We all probably know Him as the god who lived in the Himalayas with his wife Parvati and sons, Ganesh and Kartik. He is also known as ‘Neelkanth’, – the blue-throated, because he drank all the poisons that were offered to him. He is also known as one of the three lords-Brahma, Vishnu and Mahesh in which Mahesh or the Shiv is the destructor.

What does Dadaji say about ‘Shiv Swarup’?

Dadaji has explained that in reality, ‘Shiv Swarup’ is anyone whose ego has completely vanished such that He has become an embodiment of salvation (kalyan swaroop) for others.

Now, whenever you visit a temple of Lord Shiva, remember that you are bowing down to all those who have overcome their ego and become instruments of salvation of the world.

‘Neelkanth’ means anyone who swallows the poison (of insults and abuses) that the world offers him with equanimity and not only that, but he blesses everyone including his opponents and oppressors. Such a person becomes Shiva.

Is it possible to become ‘Neelkanth’ or ‘Shiva’?

Dadaji has explained that it is easy to become ‘Shiva’ for anyone who makes the firm decision that, ‘From today onwards, if anyone says that ‘you are worthless, you are weak, you are stupid’, I will take the insults and criticisms with equanimity i.e. I do not keep any negative for them and bless them at the same time.’

Therefore, if you want to be liberated from this world, you have to accept whatever comes your way, whether it is good or bad. This way, your accounts will be settled. Whatever you have given to others, you will receive in return. If you accept it gladly, you will be settling your account and be on your way to becoming Shiva.